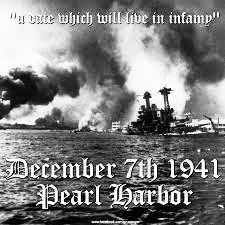 At 7:55 A.M. on the morning of December 7, 1941, the first wave of Japanese planes bombed the U.S. Naval Station at Pearl Harbor in Hawaii. After just two hours of bombing, more than 2,400 Americans were dead, 21 ships* had either been sunk or damaged, and more than 188 U.S. aircraft destroyed. The attack so angered Americans that it brought the United States out of isolationism and officially into World War II.

Sunday mornings were a time of leisure for many U.S. military personnel at Pearl Harbor. Many were either still asleep, in mess halls eating breakfast, or getting ready for church on the morning of December 7, 1941. They were completely unaware that an attack was imminent.

At 12:30 P.M. on the day after the attack, President Franklin D. Roosevelt declared that December 7, 1941 was “a date that would live in infamy” and gave the following address to congress:

“Mr. Vice President, Mr. Speaker, Members of the Senate, and of the House of Representatives:

Yesterday, December 7th, 1941 — a date which will live in infamy — the United States of America was suddenly and deliberately attacked by naval and air forces of the Empire of Japan.

The United States was at peace with that nation and, at the solicitation of Japan, was still in conversation with its government and its emperor looking toward the maintenance of peace in the Pacific.

Indeed, one hour after Japanese air squadrons had commenced bombing in the American island of Oahu, the Japanese ambassador to the United States and his colleague delivered to our Secretary of State a formal reply to a recent American message. And while this reply stated that it seemed useless to continue the existing diplomatic negotiations, it contained no threat or hint of war or of armed attack.

It will be recorded that the distance of Hawaii from Japan makes it obvious that the attack was deliberately planned many days or even weeks ago. During the intervening time, the Japanese government has deliberately sought to deceive the United States by false statements and expressions of hope for continued peace.

The attack yesterday on the Hawaiian islands has caused severe damage to American naval and military forces. I regret to tell you that very many American lives have been lost. In addition, American ships have been reported torpedoed on the high seas between San Francisco and Honolulu.

Yesterday, the Japanese government also launched an attack against Malaya.

And this morning, the Japanese attacked Midway Island.

Japan has, therefore, undertaken a surprise offensive extending throughout the Pacific area. The facts of yesterday and today speak for themselves. The people of the United States have already formed their opinions and well understand the implications to the very life and safety of our nation.

As commander in chief of the Army and Navy, I have directed that all measures be taken for our defense. But always will our whole nation remember the character of the onslaught against us.

No matter how long it may take us to overcome this premeditated invasion, the American people in their righteous might will win through to absolute victory.

I believe that I interpret the will of the Congress and of the people when I assert that we will not only defend ourselves to the uttermost, but will make it very certain that this form of treachery shall never again endanger us.

Hostilities exist. There is no blinking at the fact that our people, our territory, and our interests are in grave danger.

With confidence in our armed forces, with the unbounding determination of our people, we will gain the inevitable triumph — so help us God.

I ask that the Congress declare that since the unprovoked and dastardly attack by Japan on Sunday, December 7th, 1941, a state of war has existed between the United States and the Japanese empire. “

Congress declared war against Japan that same day. On Wednesday, Dec. 7th  starting at 8 in the morning the bells at our Congregational Church will ring every ½ hour until 3:45 and then every 5 minutes until 4 when they will go silent.  The Bells at our New Life Methodist Church will start ringing at 8:15 and then at ½ hour intervals until 3:45 when they also will ring every 5 minutes until 4 when they will also go silent.  The New Fairfield Veterans Association (NFVA) will be at their monument at 4 for a prayer service in memory of those who perished that day and in the vicious war that followed. All members of the New Fairfield community are invited to attend and enjoy this great part of the New Fairfield experience.

President Roosevelt would ask Admiral Chester A. Nimitz to take charge of the situation in the Pacific. He would land there on Christmas Eve and took a tour of the destruction.  His assessment was that the Japanese had made three serious mistakes as follows:

Mistake number one : The Japanese attacked on Sunday morning. Nine out of every ten crewmen of those ships were ashore on leave.  If those same ships had been lured to sea and been sunk–we would have lost 38,000 men instead of 3,800.

Mistake number two : When the Japanese saw all those battleships lined in a row, they got so carried away sinking those battleships, they never once bombed our dry docks opposite those ships. If they had destroyed our dry docks, we would have had to tow every one of those ships to America to be repaired.  As it is now, the ships are in shallow water and can be raised.  One tug can pull them over to the dry docks, and we can have them repaired and at sea by the time we could have towed them to America.  And I already have crews ashore anxious to man those ships.

Mistake number three : Every drop of fuel in the Pacific theater of war is in top of the ground storage tanks five miles away over that hill. One attack plane could have strafed those tanks and destroyed our fuel supply. That’s why I say the Japanese made three of the biggest mistakes an attack force could make or God was taking care of America.

Anyway you look at it–Admiral Nimitz was able to see a silver lining in a situation and circumstance where everyone else saw only despair and defeatism.

The NFVA meets on the first Wednesday of the month at the Senior Center at 7 P.M. (meetings usually last an hour).   We welcome all American veterans, male and female of all services to attend, enjoy and participate in our many activities.  Information may be obtained at NFVA, Box 8088, And New Fairfield, CT 06812 or at 203-746-5400.