Our Local Veterans Remind Us to Remember Pearl Harbor Day

21 Places to Shop in ‘Sherman Style’ for the Holidays 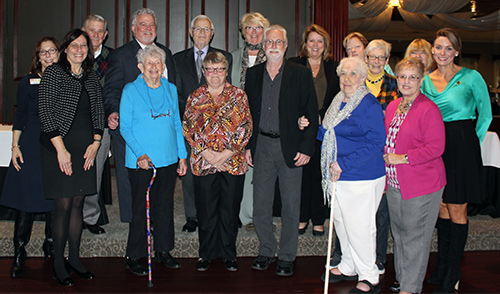 The first snow of 2016 ushered in a beautiful morning filled with comradery, compassionate support and generous giving, all on behalf of Regional Hospice. At this 25th Annual Giving Circles Breakfast, members of the New Fairfield and Sherman communities united in support of those in need of hospice and bereavement services.

The day’s breakfast was highlighted by Putnam County Sheriff and U.S. Army Brigadier General (Retired), Donald B. Smith, who bravely shared the personal story of losing his wife, Jane Smith. Sheriff Smith explained the challenges he and his family experienced in accessing quality care for Jane at the end of her life, stating that finding the Center for Comfort Care & Healing was “an answer to prayer,” and emphasizing that he and his family “were blown away by the facility.” Smith went on to detail the many ways in which, once settled into the Center, Jane was “surrounded by love.”

That love included a full Thanksgiving dinner for Jane and Don and their large family, orchestrated with ease by Regional Hospice’s Executive Chef Aaron Swart. Smith recollected how Jane’s every need was met with “love, dignity and respect,” as were the needs of him and his family, even the Smith’s 8 grandchildren who loved playing on the Center’s playscape.

Smith stressed that the patient suite where Jane stayed was, “not a hospice room, it was HER room.” All of her favorite things were there. She was on surrounded by her quilts and photos of her family scrolling across the television screen. Her bed was even lovingly set at a height so that Don’s, “eyes could make contact with hers.” And, when Jane’s life neared the end, the caring clinical team gently roused Sheriff Smith from sleep so that he could be with his beloved wife in her final moments.

Admitting that he had been resistant to even using the word, “hospice,” in retrospect Sheriff Smith’s one regret was not finding Regional Hospice’s exceptional services sooner. He plans to advocate on the organization’s behalf so that more families like his are able to access quality hospice care. Due to their positive experience with Regional Hospice, in the Smith’s family dictionary the word “hospice” is now filed under “L” because “love is the one word that best describes hospice.”

We are so grateful to Sheriff Don Smith for his candor and kindness, and appreciate that we could be of service to the Smith family in their time of need.

Our heartfelt thanks go to all of those who participated in this year’s breakfast including Cynthia Emiry Roy, President & CEO of Regional Hospice for sharing an update on Regional’s activities; Bill O’Keeffe and Katie Harrison for their dedication as Co-Chairs of the event; Rev. Justin Smith for his invocation; Susan Chapman, New Fairfield First Selectman and Don Lowe, Sherman Selectman for joining us; and to all of the generous table sponsors and raffle donors.

By Regional Hospice and Home Care