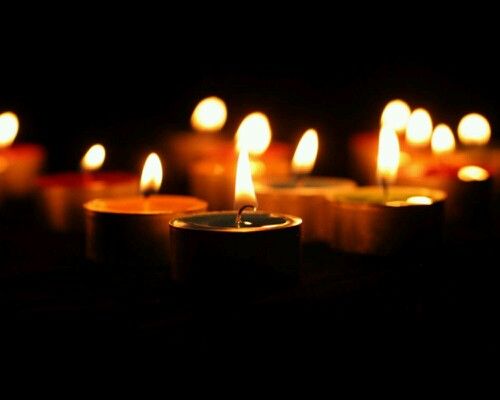 Please note that this year Christmas Eve falls on a Sunday, therefore the Mass in memory of the deceased children will be on Saturday, December 23 at 7:30am. The Mass is only a half hour and breakfast will be served in the church hall immediately following the Mass. Although this is a Catholic Mass, everyone is welcome. If you would like to add a child’s name to the list or if you have any questions please contact Carol and Sonny Cario at 203-746-1538.

‘Who then can so softly bind up the wound of another as he who has felt the same wound himself”. Thomas Jefferson

Carol and Sonny Cario have lived in New Fairfield for over 40 years and raised their children here – Billy, Cathleen, Cindy and Brian. In September of 1990, they experienced every parent’s nightmare. Their son Brian died in a motorcycle accident on September 4th. Ironically, their oldest son, Billy, a New Fairfield police officer at that time, delivered this unbearable news to his parents.

Anyone who has endured the death of a child knows the grief that comes with this life changing event is especially debilitating during the holidays.

On Christmas Eve 1990, Carol decided to attend the 7:30am Mass at St. Edward the Confessor Roman Catholic Church. She needed prayer and solace to understand how the family would get through this first Christmas without Brian. And then, during the Mass, she heard Brian laugh. Carol knew Brian was telling her he was OK, she felt like she was being hugged. For a parent whose child is recently deceased, the longing to touch that one more time can leave you breathless. To feel your child’s presence is a gift. That “hug” helped her get through that Christmas, and began a ministry that she and Sonny have shared with other grieving parents for 27 years.

In February of 1991, our son Steven died in a car accident on Valentine’s Day on his way to school. We were guided through those first mind blurring weeks by many members of St. Edward’s and directed to Compassionate Friends, a non-denominational group for grieving parents. It was during these early days of our grief that we met Carol and Sonny and Bob and Mary Lou Alberetti.

The Alberetti’s son, Rob, died in a bicycling accident in August of 1990 while he was attending Georgetown University. The connections between the couples in New Fairfield and the surrounding areas are “unusual” in many circumstances and we’ve become intertwined.

In 1991, Carol Cario arranged for the 7:30am Christmas Eve Mass at St. Edward’s to be said in “memory of all the deceased children”. Carol wanted to share the joy she experienced when she felt Brian with her at the Mass. Joy is Carol’s favorite word. It’s a frequent word in the Bible and Carol and Sonny believe you have to find it even in the saddest of times. It was our first Christmas without Steven and we really didn’t know what else to do. The Mass is short, only a half hour, but being with other people who were also grieving for a child made us feel less alone.

We were a small group at that first Mass and the Cario’s invited everyone back to their house for breakfast. Carol makes a great egg casserole, and someone brought some rolls and sweets from the Goodie Shoppe and we all fit around the kitchen table. We were even able to have a few laughs.

That was the beginning of a Christmas Eve tradition that’s now in its 27th year. Tragically, more grieving parents have joined us over the years and we’ve outgrown the Cario’s kitchen. St. Edward’s now reserves the date for us each Christmas Eve and we use the church hall for breakfast following the Mass.

Early on we started bringing a candle to place in front of the altar in memory of our children. As of last year there were 130 children’s names on the list that Carol reads out during the Mass. The glow from all those candles brings a sense of peace to those gathered on Christmas Eve morning.

Deceased children are not always young. Many parents grieve for children who were parents themselves. Some parents mourn more than one child. Children die in accidents, from illness, suicide and murder. We have two families who mourn children who died on September 11th, one in a plane, and the other as a first responder. Most importantly not everyone that attends this Mass is Catholic or from New Fairfield. Anyone is welcome. It’s about being with people who share the same sadness as you, and helping those who are newly bereaved.

Bob and Mary Lou Alberetti both look forward to the Christmas Eve Mass because it’s a way of honoring Rob’s memory, yet very bittersweet especially when you see all the candles on the altar and realize that you are not alone. Bob said “your heart goes out to the new people because you can remember the agonizing pain they are experiencing, it really gets to you.”

Bill and Fran Kahler now live in South Carolina but raised their family in New Fairfield and their two daughters are still in the area. In April of 1990, their son David died from complications after being struck by a hit and run driver in New York City. The Kahlers are not Catholic but find the Mass and the breakfast peaceful and as Bill said “there is something about sharing with people they’ve only known through Compassionate Friends and now only see once a year, that is so helpful. He also feels it is a time to give back by helping those who are newly bereaved. Bill said although the grief softens, it never goes away.

Carol shared a poignant story with me. She met a woman whose baby died in a house fire over 40 years ago. This woman told Carol that over the years she never really shared the story with anyone outside her family. Carol added the baby’s name to the list. It was a healing for this woman the first time she heard her child’s name read at the Christmas Eve Mass. She has since passed away, but her baby boy’s name is still on the list.

Through the years Carol has been a volunteer with Hospice and Healing Hearts. Both these organizations now contact her with this information. Carol sends a note of introduction telling her own story and offers help. Carol and Sonny have invited people to their home or met them for dinner. Each year Carol keeps a list and asks permission to remember the children who passed away in the Christmas Eve Mass. Carol and Sonny have brought enormous comfort to people throughout the community who are dealing with this devastating experience.

Anyone who would like to be included in this Christmas Eve Mass, on Saturday December 23, and have their child’s name added to the list please contact Carol and Sonny Cario at 203-746-1538.