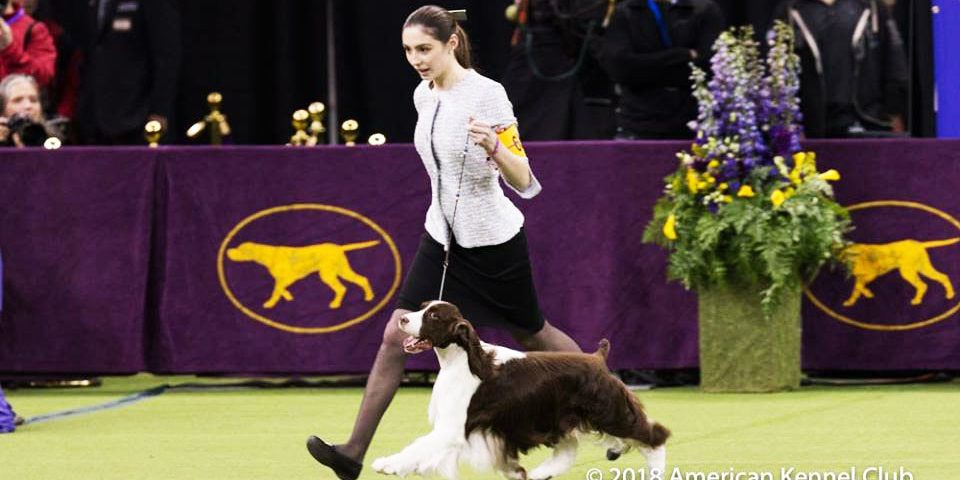 Congratulations are in order for New Fairfield High School senior, Lily Mancini, who took home the Best Junior Handler prize at the prestigious Westminster Kennel Club Dog Show on Tuesday, Feb. 13. Years of dog show handling culminated in the huge win for Lily, a Sherman resident, who says “My dream has been to win the Westminster.”

In order to qualify for the top-ranked show, which is held at Madison Square Garden, the young handlers, aged 9 to 18, must win Best Junior Handler at at least seven other AKC Licensed or member shows in the previous year. Remarkably, Lily has qualified for Westminster every year that she has showed, since starting at the age of 9.

Of the win, Lily is humble, stating “It’s really an honor to be awarded such a prestigious win. I’ve been working towards this for the past 9 years, and the amount of talent I was surrounded by was shocking, almost in a good way as we are all the future of the sport. Any one of the kids I was competing with have what it takes to be number one.”

At the Westminster last week, Lily’s teammate was both a pro show dog and friend. Though Lily says she typically switches between dogs at a show, for this show it was all about her and GCH Cerise Celtic Thunder–otherwise known affectionately as Liam. A much-decorated show dog, Liam is an eight-year-old English springer spaniel who was bred at Cerise Kennel in Sherman. Fresh off a dog show tour in Japan, Liam is described as “highly energetic, and puts the spring in springer. He’s also super friendly, and soft.” Lily notes that Liam is a bonafide professional, “There’s never a moment I step in the ring that Liam isn’t amped up to be in there.” She adds that on the other hand, “Liam is definitely a companion, all he ever wants is someone to show him some type of affection.”

Lily credits her mentor at Cerise Kennel, Kathy Kirk, as teaching her, “every single thing I needed to know about showing” and preparing her for the pressures of high-level dog shows. Lily says that going into Tuesday’s competition, “I put a lot of pressure on myself at the Westminster. Knowing it was one of the last times I would be competing in juniors there…in general had freaked me out.”

A massive time commitment, Lily explained that being a junior dog handler requires countless hours of practice and a large amount of travel. She said, “Time seems to go by so quickly when you show dogs, there’s always something that needs to be done while working with them, whether it’s letting them go out to the bathroom to grooming and bathing them…Even when I was a weekend away from aging out of Juniors, I would still practice and try to get everything down perfectly.” Regarding show commitments she said, “There are dog shows every weekend of every month, minus two weekends in December. I would usually take a weekend a month off, sometimes two depending on how far away the shows were from home.”

She went on to say that, “Showing dogs has changed my life drastically. Without them, I wouldn’t be as independent as I am now. They’ve taught me patience because dogs do have minds of their own, and are perfectly capable of making their own decisions. Shows also taught me to have perseverance because not every weekend do you walk out of the ring with a ribbon in hand, and that can be extremely frustrating/discouraging, but you when have a love for something so much, you don’t let anything get you down.”

Lily’s future will certainly involve showing dogs, though she starts college in the fall. “I’ve always said to myself, ‘Another day, another dog show.’ I plan on showing dogs for as long as I am able to while going to college.”

Though Lily hasn’t committed to a school yet–not surprisingly, she is deciding among several acceptances–she is likely thrilled to have future funds awaiting in the form of her Westminster Best Junior Handler grand prize, a $10,000 scholarship to the college of her choice.