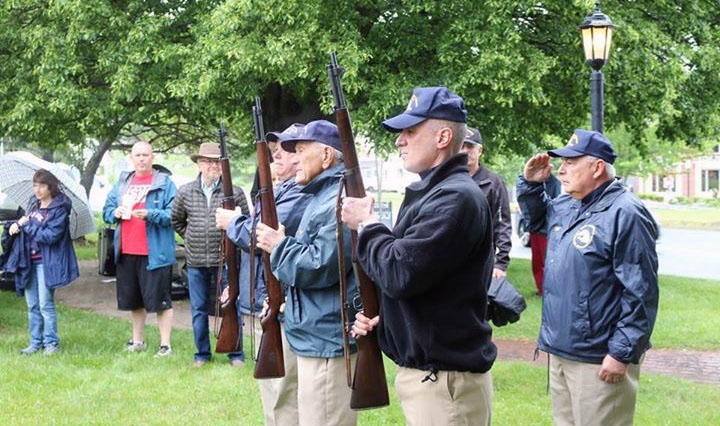 NEW FAIRFIELD – This year, the New Fairfield Veterans Association (NFVA) will continue its annual tradition of honoring Memorial Day weekend starting on Saturday, May 26th and continuing until Monday May 28th. On Saturday, (10:00 A.M. until 3:00 P.M.), the NFVA will be collecting flags to be retired at Stop and Shop. The NFVA considers our flag to be a “big deal”, so we collect those in need of retiring on both Memorial Day and Veteran’s Day as a continuing service to the town of New Fairfield. NFVA honors our flag by following the United States Code Title 4 Chapter 1 – The Flag, Section 8K states the following: “The flag, when it is in such condition that it is no longer a fitting emblem for display, should be destroyed in a dignified way, preferable by burning”. You can always tell that the NFVA veterans are there as we will always wear our distinctive hat and provide you with our credentials.

On Sunday May 27th, we will have the privilege of representing New Fairfield in the Sherman Memorial Day Parade which starts at one in the afternoon in Sherman. On Monday May 28th, we will close out the Memorial Day weekend with a very solemn ceremony at the Veteran’s Memorial (opposite the Starbuck’ entrance to Stop and Shop). This ceremony will start around 10:15 with appropriate music by the New Fairfield High School Band. The music will conclude shortly before eleven when the formal ceremonies begin. We hope that you take the time to look at the names on the memorial and see all of those from New Fairfield who paid the ultimate price for our freedom. NFVA will be providing wreaths for both the regular stone memorial and the new one that was placed there in 2013 to honor T.J. Labraico whose name has now joined the other heroes honored on the veteran’s green.

The first Official “Memorial Day” originally called “Decoration Day” was held on May 30, 1868. On May 5, 1868, General John Logan, national commander of the Grand Army of the Republic, proclaimed in his General Order No. 11, that a day be observed for flowers to be placed on the graves of Union and Confederate soldiers at Arlington National Cemetery. “The 30th of May, 1868, is designated for the purpose of strewing with flowers, or otherwise decorating the graves of comrades who died in defense of their country during the late rebellion, and whose bodies now lie in almost every city, village, and hamlet churchyard in the land. In this observance no form of ceremony is prescribed, but posts and comrades will in their own way arrange such fitting services and testimonials of respect as circumstances may permit.”

During the first celebration of Decoration Day, General James Garfield made a speech at Arlington National Cemetery, after which 5,000 participants helped to decorate the graves of the more than 20,000 Union and Confederate soldiers buried in the cemetery. That tradition continued un-officially for many years on the last weekend in May, known as Decoration Day, at Arlington and Civil War graves in cemeteries throughout the country.

The first state to officially recognize the holiday was New York in 1873. By 1890 it was recognized by all of the northern states. The South refused to acknowledge the day, honoring their dead on separate days until after World War I, when the holiday changed from honoring just those who died fighting in the Civil War, to honoring Americans who died fighting in any war. It is now celebrated in almost every State on the last Monday in May (passed by Congress with the National Holiday Act of 1971 (P.L. 90 – 363) to ensure a three day weekend for Federal holidays). Several southern states have an additional separate day for honoring the Confederate war dead: January 19 in Texas, April 26 in Alabama, Florida, Georgia, and Mississippi; May 10 in South Carolina; and June 3 (Jefferson Davis’ birthday) in Louisiana and Tennessee.

As veterans, the members of the NFVA are proud to continue the town’s dedication to those who have written that “blank check” to provide the freedoms that we all share. Please continue as you have in the past to trust us with the proper way to retire your flags by bringing them to us at Stop and Shop so that they may be retired in New Fairfield. In the past, we have been honored to retire flags that flew in WW II, Korea and Vietnam as well as one that flew at the World Trade Center; however no flag is more important to us, then those that have flown in New Fairfield. We also hope to see you at the Sherman Parade and at our Memorial Day Ceremonies on Monday as we wrap up this great weekend.

Information about NFVA may be obtained by contacting us at NFVA, Box 8088, New Fairfield, CT 06812 or at 203-746-5400. We meet on the 1st Wednesday of the month at 7:00 P.M. in the New Fairfield Senior Center. If you are an American Veteran who has been honorably discharged, please come and see what we are all about. You will be glad you did as you will become part of a dynamic patriotic organization.