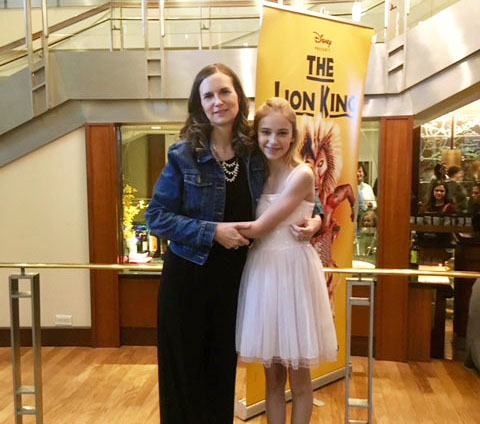 The talent search, sponsored by PBS kids, is a new television series which follows a young host, piano-prodigy Ethan Bortnik, around the country on the search for musically-gifted young people. Claire originally found out about the new program when her mother, Amy Kuntze, caught a commercial that aired when a younger sibling was watching PBS kids.

Claire describes entering on a whim, being excited about becoming a finalist, and, ultimately, the win. “I was so honored just to be selected for the show and never dreamed I would win! It felt amazing to win and I was completely shocked and surprised but so happy. My legs starting shaking as soon as the contestants got called up on stage and I still felt like I was shaking in my interview afterwards but thankfully you couldn’t tell,” she says.

Immediately after Claire’s win was announced at the Bushnell Center for Performing Arts in Hartford on April 27, she was handed a microphone to sing, “it was definitely nerve wracking to have to sing right after…but at the same time once the music started and I started singing I felt confident and more relaxed.”

Claire sang “A Million Dreams” from the recent film, The Greatest Showman, in which she had a “very small SAG role… It’s such a quick scene but I’m running by, giggling in a pink nightgown with a few other girls while Young Charity reads a letter from Young Barnum. I just loved the movie and fell in love with the song and its message about the importance of following your dreams.”

Online votes are tallied to determine the winners of the talent search, and Claire wanted to say “I would like to personally thank everyone that voted for me in this contest. I couldn’t have done this without the support of everyone who voted. So thank you all so much!” Amy Kuntze concurred, “As Claire’s mom, I would also like to thank everyone who voted for her. I recently got her voting comments emailed to me and to say, that I’m blown away by the tremendous amount of love and support she received is an understatement.”

Ms. Kuntze went on to describe Claire as “extremely shy and quiet…She never talks about any of her accomplishments and I think the only reason any of the kids from her school may know is because I run an Instagram page for her art and music…If you met 100 kids she would probably be the last one you would ever guess would be involved in singing and the performing arts due to her very quiet nature.”

Claire’s PBS win is one of many accolades the 8th grader can claim, among them appearing in Off-Broadway productions and marching with Camp Broadway in last year’s Macy’s Thanksgiving Day Parade. Of juggling school and music, she says, “I have a pretty busy schedule but I’ve never joined any sports teams, which is how I’ve managed it.”

For now, Claire is just excited about graduating from 8th grade and looking forward to some free time. “I purposely didn’t audition for anything so I could have a relaxing summer. I’m looking forward to taking some art classes, going to the lake, and learning to play the ukulele this summer. I recently got one for my birthday and started teaching myself how to play. I also love doing crafts and designing and making small doll furniture for my sister’s Disney dolls.”

However, the future is always on the horizon for this young artist, “My voice teacher wants me to learn to sing some Italian this summer so I can hopefully audition and get to sing in Australia at the Sydney Opera House one day in the next year few years,” she said.

“And, of course, I’m super excited about going to Los Angeles to film the national show!” Claire says. The national talent show will be filmed in Los Angeles later this year and will be aired on PBS at the end of the year or early next year.