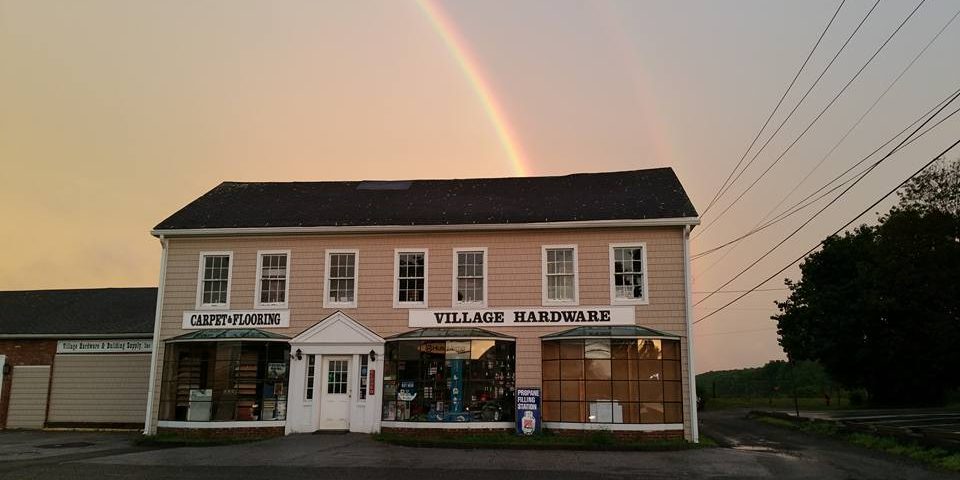 It is hard to imagine the landscape of the center of town without Village Hardware tucked inside their historic house, but thankfully customers will only have to travel around the block to find the same friendly faces and service they know and love. Village Hardware has moved to 3 Dunham Drive in New Fairfield. They are located in the same building as Prime Time Fitness. Customers entering the parking lot will loop around the back and find Village Hardware at the far end, the last storefront in the warehouse-style retail location. Landlord and owner of Prime Time Fitness Pat Toth remarked that although Village Hardware is moving “off the beaten path”, they are in a location that is enjoying more and more foot traffic. He stated, “They are a great bunch of guys and Dunham Drive is definitely becoming livelier than it used to be. I hope the town comes out to support them on their move.”

Standing next to manager and former owner, Doug DiSarro, chatting about the impending move on what was otherwise a quiet Monday morning, customers casually came in and out of the store. “My daughter called ahead about a part,” one patron remarked. I looked up and it was Ray, who formerly managed the television station in town. Doug grabbed it for him and Ray was on his way. A contractor came in with heavy boots. He asked about a part and Doug pointed him in the right direction. Another gentleman came in with his son in tow, unsure about which size fitting he needed for a project. He spoke with Doug, got his part and got on his way. This is the type of service and familiarity you just cannot get in a big box store outside of town. It is one of the main reasons why Doug remains at the store he once owned. “I love this town,” he stated warmly, “I love the people here and the pace and the history.”

The history of the old Village Hardware, located at 1 Brush Hill Road, is something to be celebrated. According to Doug, Arthur Chase purchased the property in 1924 and used it as his homestead. When he died in 1955, the farm was sold and developed as a shopping center by the Collins family. The home itself was moved in order to accommodate the shopping center’s development. Earl Taylor was the original owner of the Village Hardware, followed by a group of schoolteachers and then Doug’s father in 1981. Doug purchased the store from his father and later sold it to current proprietors Dan Churchhill and Steve Wright in 2007. The building is one of the oldest in New Fairfield.

Many in town have wondered what will happen to the building after the move. Doug explained they tried to get historical landmark status, but was told that the existing landlord would be the only one capable of filing with the town. A call put in by this reporter to landlord Sound Development Group, LLC went unreturned.

“We’ve been here without plumbing, without a heating system, the floors, everything would have to be replaced and restored for another tenant ” Doug said, “it would be a lot easier for someone to knock it down, especially if they don’t have the same sense of attachment that we all do.”

Focusing on securing a stable future, the new Village Hardware at 3 Dunham Drive boasts more space (in addition to water and heat), giving the owners an opportunity to expand their selection. What they will lack in the charm of their beloved former homestead, they will gain in service and selection. “It was important for us to stay here locally, we know our customers and always want to be able to provide a service to them,” said Doug.

Leaving their building behind was certainly not high on their list, but rising fees and charges made it impossible for them to be able to stay. “We are happy that we will still be here in town. We love it here. We just hope everyone comes to the new store.”

The Village Hardware is currently closed as they make their way over to the new building this week. They plan to open as soon as possible and, in the meantime, will be leaving their phones on for customers. “If customers need anything this week, they can always call us and we will try to help them as best we can,” said Doug, “we plan to be open very soon.”