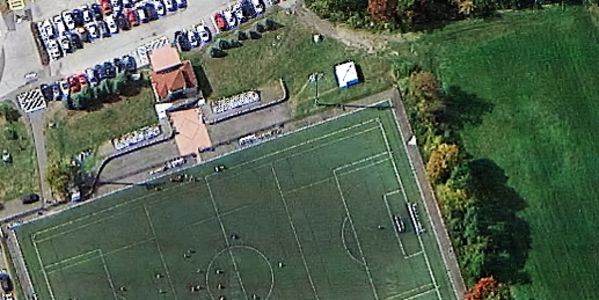 Two resolutions were voted on and approved at a Town Meeting held on January 26 in the Community Center. The meeting was followed by a brief BOS meeting. The Town Meeting was attended by over 120 residents.

First Selectman Susan Chapman called the meeting to order. Town Clerk Pamela Dohan read the call of the meeting, which was being held:

(1) the construction by New Fairfield Youth Lacrosse, Inc., at no cost to the Town, of a multi-purpose turf field, measuring approximately 200 feet by 100 feet, on a portion of Town-owned property located at 54 Gillotti Road known as ‘Lower Rebel Field,’

(2) the First Selectman to execute on behalf of the Town a contract with New Fairfield Youth Lacrosse, Inc. regarding the construction and naming of the field in the memory of John Pendergast, Jr., and

(3) the acceptance of any and all cash and in-kind donations to the Town associated with the construction of the field. “

Selectman Mike Gill was nominated as moderator. Mr. Gill presented the first resolution concerning the turf field and opened the floor for discussion. There was none. The resolution was put to a vote and was passed with no dissenting votes.

The turf field, which is being built in memory of a New Fairfield High School alumni, John Pendergast Jr. who tragically died at the young age of 21 in a motorcycle accident caused by a distracted driver, will cost between $130,000-$135,000 to construct at no cost to the Town and will be located on the existing Lower Rebel grass field. New Fairfield Youth Lacrosse, Inc. has raised $115,000 so far. The resolution stipulates that construction cannot begin until the full amount has been raised.

According to materials distributed at the meeting, the contract between the Town and New Fairfield Youth Lacrosse, Inc. states that the Town will have no financial liability; all necessary funds must be in hand in order to begin construction; once begun, construction must be completed within 365 days; all contractors must be approved by the Town; materials and improvements purchased for the turf field shall become property of the Town; scheduling and use of the field will be governed by the New Fairfield Board of Education and Parks & Recreation; and the field will be named in memory of John Pendergast, Jr.

Another requirement of the contract is that an additional fund to finance replacement/maintenance costs be established by three organizations; New Fairfield Lacrosse, New Fairfield Soccer, and Falcons Football. The estimated life of the turf is estimated at ten years.

According to student and project founder Noah Alviti, “It is very rewarding to have such a large turnout and unanimous support for the multi-purpose turf field at the Town Meeting last Thursday.  This has been a long 2 year journey with a lot more work and approvals through the town processes than originally expected.  We are looking forward to starting construction in early spring and build this field in memory of John Pendergast Jr.  I want to say thank you to all of the town members and organizations who have supported us and financially contributed, especially New Fairfield Lacrosse, New Fairfield Soccer, and Rebel Booster Club.”

He went on to state, “This project would not have made it this far without the help of my advisors, NFHS varsity lacrosse coach Marty Morgan, John Pendergast, my dad, and vocal supporters such as Mrs. Hickey and Mr. Costabile. I am so happy that we now have the land contract signed and am looking forward to creating this field. We still have a financial gap of $15,000 to our project cost goal of $130,000.”  Donations can be made at www.newfairfieldlacrosse.com or checks can be mailed to New Fairfield Youth Lacrosse, 10 Jewel Lane, New Fairfield, CT  06812.  Also, a GoFundMe campaign has been established and is available at https://www.gofundme.com/JPendergastJrField.

The second resolution for the appropriation of funds to purchase a fully outfitted police vehicle was presented for discussion. There was none and the resolution was put to a vote. It passed with no dissenting votes.

A regular Board of Selectman meeting followed where a motion was made to authorize the First Selectman to sign a lease with Verizon to go on the Tower Hill cell tower. The lease is for a standard five year term with the possibility of extensions. Verizon would be the first cellular provider to lease space on that tower. The Board approved this unanimously.

The Board also reappointed Tom Edwards to the Parks & Recreation Committee and Rourk Traynor as the Tree Warden.