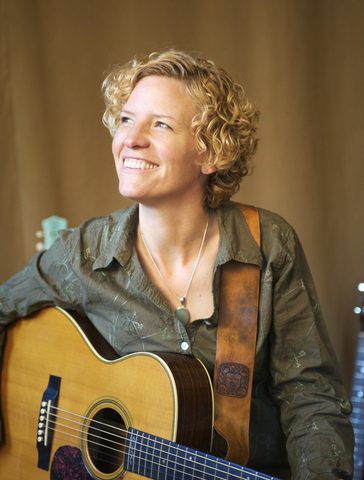 All I can say is…get there early! Where? To the Groovin’ Coffee House at the NF Community/Senior Center Complex (33 Rt. 37), which transforms into an intimate post-Greenwich village era folk music venue. Good food, excellent sound and awesome talent makes it as complete an entertaining night as you can get here in New Fairfield. And we are just so excited to bring singer-songwriter renown Catie Curtis to our stage as our featured artist.

Opening the show, which starts at 7:30 PM sharp (doors open at 6:45), will be another songwriting guitarist, Mike Herz. Classifying himself as a poet with a guitar in tow, Mike was already deeply into writing prose when was introduced to the works of Bob Dylan. This ultimately led to an epiphany to put his words to music, potentially expanding his audience, which it certainly has done. I liken his sound to John Gorka with a little Robert Earn Keen thrown into the mix. Thoughtful lyrics that draw you in alongside tasty guitar accompaniment, his was a great choice to open the evening. Mike now gigs regularly in the New England area, and has a new solo CD under his belt, The Acrobat, which, along with others, will be available for signing during or after the show.

We’ve been talking about getting Ms. Curtis to the Groovin’ Coffee House stage for some time now. Greatly talented performers have busy touring schedules and with our limited dates for shows, it’s often hard to get things to jive. That said….WE DID IT! And, I might say, just in the nick of time, as this will be Catie Curtis’ last tour, dubbed, “The Final Outing”. I mean, this is a gal who has played Lillith Fair, Carnegie Hall…….even the White House! And you’ve already heard his songs when you watched “Grey’s Anatomy”, “Dawson’s Creek”, and “Felicity”. You’ve eaten popcorn to her songs when you saw “Finding Graceland” and “A Slipping Down Life”. 25 years on the road has made Catie Curtis a household name on stations like WFUV or ____. The New Yorker even christened her a “folk rock goddess”.  Rolling Stone wrote, “With her deceptively gentle voice, she can turn on a dime and thrill the listener with unforeseen power and emotion. Intricate acoustic picking sometimes recalling Joan Armatrading…but Curtis is very much an original.”

Catie looks forward to hitting the road with her new recording, “While We’re Here”, her 15th. While the concert stage has sustained her long career, Catie is finally giving in to her nesting instinct, saying “The themes of ‘While We’re Here’ involve endings and beginnings, change and resilience. After 25 years on the road I am ready for my own new beginning.” Go to our website to link onto Catie’s. There you’ll find her entire discography. About Catie it has been said, “Any fool can write a love-gone wrong song; it takes a real genius to write a love-gone-right one. No urban songwriter does that better than Curtis”.

Reserve a table for you and your friends now; you won’t be disappointed!

Advance Tickets can be purchased at the NF Sr. Center All Sales Are Final.