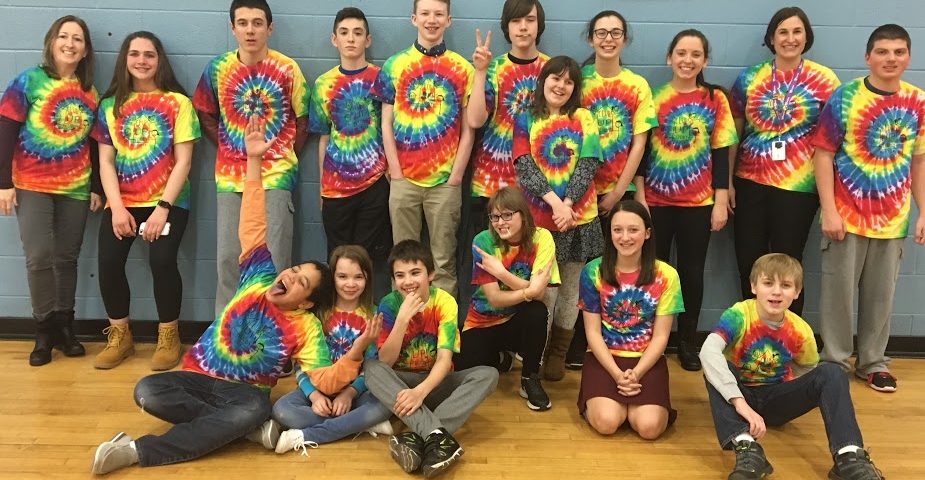 Buddy Up Participants and Advisors

If you ask 15-year-old Dasha Lipke what one of her best experiences at school has been this year, without hesitation, she would say “And, Action,”

“Unified Theater helped me open myself up to the possibility that anything can happen. It forced me to go out of my comfort zone,” said Dasha, who is an eighth-grader and New Fairfield resident “It was fun to work as a team.”

Students spent seven months working on the production, on everything from lights to sound to scenery. “They did everything that it takes to create, produce and direct the show,” said Amy Jacques, middle school counselor and program advisor.

Over $400 was raised by the kids through fundraising, which went towards props, costumes and snacks. 10 percent of the sales went to the Scotty Fund, a non-profit, charitable organization that provides support to children with life-threatening and critical illnesses.

For the production, Dasha was part of the crew, which was responsible for making sure the stage was well lit. “I had to turn the lights on at the right time when they went through the scenes,” she said.

Dasha said she was happy to get the chance to spend time with a great group of kids. “I knew a few of the kids before but I met some new kids that were really nice and very helpful.”

She said that one of her favorite parts of the production was the fundraising. “We made rice krispy treats at the school and sold them all around the school,” she said.

Jacques said the kids got much more out of the program than just being in the show. “It’s about the process and not the product. There are so many things these kids did that they can put back into their academic and social world as far as compromising, negotiating, learning how to listen, the difference between criticizing and critiquing, reading and writing, and the math that was involved for the fundraising,” she said.

Working on the production was an experience Jacques said she will never forget. “It was probably the highlight of my career, it was that amazing,” she said. Aside from Unified Theater, a second program launched at New Fairfield Middle School this year is Buddy Up.

According to New Fairfield Middle School counselor Jennifer Huber, Buddy Up is a recreational program that pairs children in regular education with those in special education. The program is intended to help children work on their social skills in a structured and supervised environment.

As part of Buddy Up, children took part in an assortment of activities including cooking, baking, and arts and crafts.

“We designed ornaments around the holiday season and donated them to a local charity. We played games in the gym such as dodge ball and four corners. We took part in getting to know you activities, where students learned about each other,” she said.

According to Huber, children encouraged each other to participate in the activities, and helped one another on projects. “All the kids really got to know each other well over the course of the program. It was really cool to see this,” Huber said.

Dasha said one of her favorite activities in Buddy Up was the egg drop. “We had to protect our eggs. We learned how to work together,” she said, happliy adding that when she dropped her egg, “it didn’t crack.”

She also got to make her own board game. “It was called apple slam. You have two dice and there are certain pieces and shapes on the boards. We designed it, made all the pieces and played it,” she said. “It was a very good team effort.”

Dasha loved getting to work side by side with the other students as well as all the help she received from the teachers.

“The staff was always there to guide us and support us,” she said. “They wanted us to succeed and that was the most important part of everything we did together.”