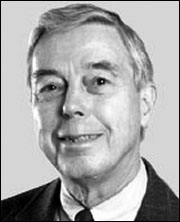 NEW FAIRFIELD – Leslie E. Robertson is a structural engineer who has worked on some of the most recognized buildings in the world. The part-time New Fairfield resident, has recently written The Structure of Design an Engineer’s Extraordinary Life in Architecture. In it, he describes his start in the field, focuses on the significance of individual projects, and details his personal relationships. Given the current era’s focus on celebrity over accomplishment, it is unusual to find a professional of Mr. Robertson’s standing who actually seeks to avoid the attention his success ensures, as he was “careful to keep my name off the sign of any building on which I was working.” The book was written after years of urging from friends and colleagues and the result is a celebration of his sixty years and counting career.

Mr. Robertson had an unusual childhood, living with various people throughout his youth. Following his parent’s split, he spent time with his mother, at military school, with his father and stepmother, and even with his grandmother. His grades were often indifferent and as he moved from location to location, he would be skipped forward or held back with little consistency. These changes created an unfocused student lacking in confidence. Despite his relative lack of success, his interest and skill with “conceptualizing systems and shapes” was evident from an early age. He also demonstrated a taste for hard work from his earliest jobs and that would hold him in good stead during his tenure in the US Navy. His time in the Navy resulted in a philosophical bend towards pacifism and a lifelong commitment towards furthering social change. Using the GI Bill to attend UC Berkeley, college with its myriad opportunities and exposures was truly the beginning of Mr. Robertson’s journey towards structural engineering.

His career began in mathematics, but quickly veered towards engineering when his skills in conceptualizing showed increased efficiencies for an electrical company. Subsequent work lead to his hire by Worthington and Skilling resulting in a move to New York as the lead engineer on the World Trade Center Towers. After ten years of intense work, the towers were unveiled to the world and Mr. Robertson became the sought-after engineer whose work would span the globe from Brazil to Tokyo to Tehran. In 1986, he founded his own firm, Leslie E. Robertson and Associates. The first section of the book is a tour of selected projects from 1956 through 2015. Each picture reminding the reader of the indelible mark he has made on the skylines of the world’s largest cities.

Mr. Robertson has worked with some of the greatest architects of the last 50 years including recognizable names like IM Pei and Philip Johnson. The largest section of the book is titled, “Collaborations with Architects.” It is a bold arrangement that places the relationship between architect and engineer front and center. If an architect is the visionary dreamer behind a structure, the engineer is the person who makes those dreams buildable.

As his friend sculptor Beverly Pepper comments in press for the book, “[Les Robertson’s] imaginative strength is in understanding the essence of engineering, of how structure is life enhancing, and making the impossible possible.” By sharing his personal relationships with the architects first, then sharing the projects resulting from those collaborations, Mr. Robertson acknowledges the symbiotic relationship between both. Detailing the innovations necessary to create buildings of beauty and functionality highlights the complexity and creativity great engineers must possess. Mr. Robertson hasn’t only worked on buildings though, his collaborations with others have resulted in parks, sculpture, and furniture of functional beauty as well.

Mr. Robertson is still hard at work today. Our interview was delayed two weeks as he traveled to Asia and Italy for work. Sharing anecdotes from his relationships with architects, he mentioned that he had just seen, “IM two weeks ago at a Harvard event, it was amazing, the man could still fill an auditorium at 99 years old.” Of living in New Fairfield, he recalled driving to Sherman to visit a woman who had worked for him and liking it so much he “bought property before noon.” The result was a home and furniture designed with his greatest collaborator, wife SawTeen See. His dedication of the book to Ms. See, “my companion, my lover, my wife, my compass, my challenger, who continues to change me for the better, breathing life into my body and my soul, while bringing happiness and love into every facet of the existence of this fortunate engineer,” perhaps the best example of the importance Leslie Robertson places on relationships and the solid foundation they have provided for both his body of work and a life well lived.

The Structure of Design An Engineer’s Extraordinary Life in Architecture will be released on April 25th by The Monacelli Press.