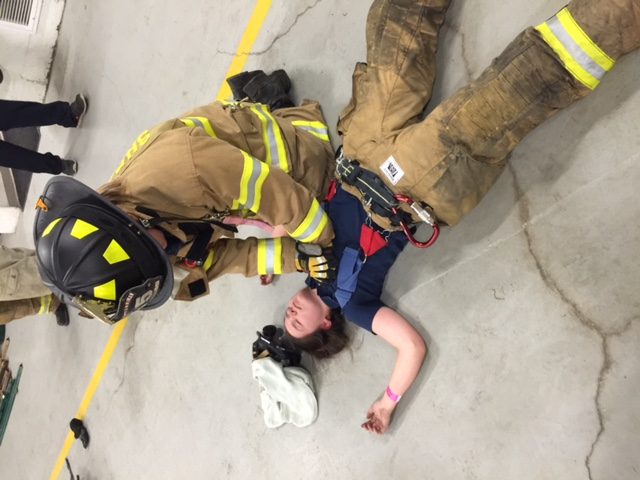 Although I hope I’d do it in a blessed suspension of consciousness to save my children, I can’t imagine personally wading into flames, floods and other dreadful catastrophes. And so, driving through a calm, warm summer evening to watch the weekly Monday night drill session at the Sherman Volunteer Fire Department, it was with an perspective of visiting from another planet that I racked my brain for what I knew about firefighters and fire stations: “Burly men with mustaches…house-gutting infernos…axes… poles…kittens in trees… parades…9/11.”

My companion that evening, Tillman, my 6-year-old son, was providing a distinct contrast these heroic images. Despite being named after Pat Tillman, an American hero, he had never been bitten by the rescue bug as far as I could tell.

“This is gonna be so boring,” he complained. “What are they going to do anyway?”

“I’m not sure,” I replied, “Maybe…they’ll get into their uniforms really fast? Or climb up a ladder? Chop through a wall with axes?”

Unexpectedly, though, his interest was piqued by the sight of the massive red ambulance parked in front of the open double bay of the station—no ladders, axes or awesome firefighting gear necessary.

“Why is the hospital truck here?” he asked.

Turns out, a good question, pointing to something valuable about Sherman’s emergency response team: Sherman is one of the growing number of towns that combine fire and EMS services in one facility.

“It’s the way things are going,” explained Anthony Sartori, EMS Captain. Bespectacled, wearing a red polo shirt, with a quiet, low-key manner, Sartori has been with the department for the past five years. As an EMS officer for the past two years and volunteer EMS worker for more than 22 years, he has seen and done it all in terms of dramatic crisis. But he lit up as he described the evening’s drill, to practice a “Firefighter Down” scenario and learn how to administer CPR with the state-of-the-art Lucas 2 Chest Compression device, recently acquired by the Sherman station. “This thing is making a huge difference,” he said. “It’s giving 100% certainty that there will be the high quality chest compressions that are needed, for as long as necessary.”

Soon the spacious Charter Hall filled up with about 25 people of all ages, sizes and shapes. The quality of the team’s attention was uniform, though, and practically palpable: It was clear that Sartori had created a strong commitment to supporting the intensely physical “hands-on” work of emergency response with an underlying basis of medical, health and technical knowledge.

After a verbal quiz on the temperatures that the firefighters’ uniforms could reach (300 to 1200 degrees Farenheit), making it impossible for EMS workers to try to work the jackets off themselves since their gloves would melt, Sartori presented the 10-step procedure that would allow firefighters to get a downed comrade out of his or her jacket so they could be administered CPR.

He then related the background information that heart disease remains the leading cause of death among firefighters, with 60% of deaths among firefighters attributable to stroke or heart attack. One such study, by the Apheresis Center of the University of Kansas, demonstrated that 77 firefighters, average age of 39, had the average arterial plaque build up of 51-year-olds. The nature of firefighting doesn’t just cause physical damage to the body through smoke, toxic airborne chemicals and fire, but wreaks havoc due to the job’s inevitable stress, sleep deprivation and erratic levels of activity. “After the rush,” with sudden relaxation, the firefighter’s already compromised system might collapse, especially after years of high-calorie meals, a beloved part of firefighter culture as well as a logistical necessity for firefighters who might not get a chance to eat again for 24 hours.

There had been respectful attention all through the lecture, but there was a practically visible uplift in energy as Sartori closed the last information-dense slide and it was time to do the drill. Downstairs in the fire truck bay, t-shirts, shorts and flip-flops transformed in a matter of disciplined minutes into helmeted, bulked-up, booted warriors..

“That’s Inna!” gasped Tillman as the helmet and mask came off one “downed” firefighter. Inna Figura is a volunteer firefighter but in Tillman’s life, up until now, she was just a friendly next-door-neighbor. She played unconscious with her head in the lap of one firefighter while two others worked to get the zipper of her jacket down while performing chest compressions. Within a couple minutes and with the minimum of efficient talk, the team had Inna’s jacket off and she was dragged about 10 feet away to where the Lucas 2 device was waiting.

The EMS workers had already been practicing among themselves, and now they slid the bowed bottom half of the Lucas 2 under Inna to cradle her at heart level. Then they snapped the curved top half onto the two ends protruding up on either side of the chest to form an oval cage. What looked like a small plunger descended down to seal to the chest. Powered by a battery pack, the Lucas 2 would provide compressions at exactly the right tempo and pressure to keep the heart pumping, and would stay in place throughout transfers into the ambulance and to the E.R.

“These are now standard in all E.R.’s and in most EMS units. We just got ours, thanks to a $7500 anonymous donor, which allowed us to buy it. This is about a $13,000 piece of equipment.” Sartori continued, “We can’t thank the donor directly by name, but we want them, and everyone, to know that we’re not just sitting on our butts waiting for the calls to come in. Every Monday night, we do drills. We’re always practicing our skills and learning new ones, and we want the community to be aware of that.”

He escorted me into the small office off the bay and showed me the call board, with its running record of fire, EMS, both, and other miscellaneous calls broken down by type. The total number of calls had already exceeded that number for previous years, and it was only the end of August.

“We are always happy to welcome and train volunteer fire fighters, but there’s also a need for help with paperwork, working the call center, and other support.”

Both groups had finished the drill, with the all-male team on the other side of the bay working through a literal snag as the downed firefighter’s wrists got stuck in the sleeves of his jacket, a seemingly small mishap but one that could add minutes to the resuscitation effort.

“Let’s do a competition, boys against girls,” I heard someone say. Inna’s group replied, “We already got it in under 7 minutes, but yeah!”

Tillman had been watching everything raptly, especially the Lucas 2 practice. He’d developed a liking for a long-braided EMS worker, Lauren Beatty, who’d told him that she’d gone to the Sherman School, too. All evening, even as they concentrated and practiced and worked, the firefighters and EMS workers had been aware of the little guy watching. When Sherman’s Lieutenant, Chris Fuchs, noticed we were getting ready to go, he bounded upstairs and returned in a flash like Santa down the chimney. He handed Tillman an unopened gift box. “Got something for you, buddy,” he said, and with a quick grin returned to the practice. Outside, Sartori handed Tillman a fire hat and coloring book and said goodbye, and we left while the firefighters and EMS workers practiced on.

Back at home, we opened the box: it was two red-and-white travel cups, one of which Tillman immediately claimed as his very own. It was emblazoned with the SVFD motto: “Ever Vigilant-Always Ready.”

I realized that in these words lay the answer to how first responders do what they do. They are ready and able to plunge into flames, danger and unspeakable horror at a moment’s notice because they are continually showing up, working hard, learning, practicing, and striving to be better. Only later, though, did the why become clear. The reason was there in Sartori’s dedication in providing education and background above and beyond the physical training. It was there in his desire to communicate how much that anonymous gift meant to the station. It was there in the gift of hat and cups and kindly attention to the little kid watching.

On view all night was the thrill of service. You can see for yourself, any Monday night at the SVFD.

The SVFD maintains its own website at shermanvfd.org, which is continually updated with events, the opportunity to view calls, important emergency response policies and contact information. Officers include Fire Chief Jim Reilly, Assistant Fire Chief Robert Accosta, Jr., Assistant EMS Chief Kathy Grant, and President Kris Fazzone. Community members are encouraged to learn about and join fire prevention and emergency response efforts as well contributing to the SVFD in other important ways; contact Anthony Sartori or Jim Reilly at (860) 354-9273 or email president@shermanvfd.org.