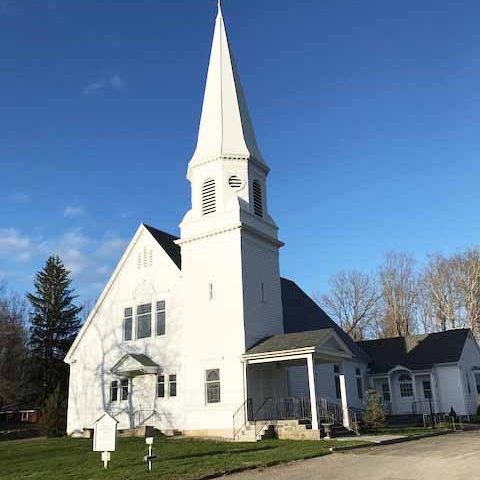 The Sherman Church in its beautiful white building on Church Road began life in a small log cabin in 1744 near what is now the Sherman Playhouse on Rte. 39. And Sherman wasn’t even Sherman then, but New Fairfield North and 58 years away from becoming its own town. To celebrate the church’s 275th anniversary, the members are planning six events during 2019 to showcase its history as a testament to the glory of God’s work on earth.

But back to The Beginning: Even though the cabin was in desperate need of repair for many years, it wasn’t until 1789 that the “Great Church” was built by the New Fairfield North Society. It could hold 500 to 600 of the faithful who had come on foot, in lumber wagons, on horseback or in horse carts or carriages to listen to two-hour sermons. When Rev. Maltby Gelston came to Sherman in 1796, however, he found a church of only 15 members (five men and 10 women) with the last names of Potter, Graves, Giddings, Kellogg, Hubbell, and Wilcock. Many of these names are still familiar on roads and buildings, and from descendants who have remained in Sherman.

In 1835, Florence and Cyrus Hungerford deeded the land on Church Road to the First Ecclesiastical Society. Membership had grown under Rev. Gelston and was strong enough to support a new church in 1836, after a split in the church, possibly due to bad feelings about changing locations. Stanley Hungerford built the church with a high steeple on top and carriage sheds across the back. It was lit with oil lamps and had two wood-burning stoves, with long stove pipes hanging from the ceiling. Women and children sat on one side and men on the other.

In 1856, the parsonage at 17 Gelston Road was deeded to the First Ecclesiastical Society by John O. Northrop. Twenty-one settled ministers and their families have lived there since. In 1887 a chapel (now the church office building) was built by Charles Evans to use for Sunday school and the noonday meal.

But in 1891, after a dinner celebrating the 4th of July, the church burned to the ground. Three chairs from the pulpit and the Communion table, however, were saved when they were thrown out of a window. The chairs are still in use today. On July 4, 1892 (exactly one year after the fire), the bronze bell that still rings today was installed. On January 28, 1893, that bell rang and the fourth and current church was dedicated. It was built by T.W. Kimlin and his brother, Henry, to the specifications of the architect, J.W. Northrop of Bridgeport. It is a Victorian style wood structure with a Bangor slate roof. Entrance to the vestibule from carriage was through the porte   cochere, which protected parishioners from getting wet. The sanctuary was built on the former church foundation and is topped by a spire some 95 feet from the ground, with a golden weather vane at its top, typical of Congregational churches in New England.

On May 25, 1950, the Sherman Congregational Church voted to become a corporation and accept all the properties of the First Ecclesiastical Society of Sherman. The name of the new entity was to be The Sherman Church. In 2004, the church membership voted to join the Conservative Congregational Christian Conference. The Rev. Paul Astbury retired two years ago, and the church is preparing to call a new permanent pastor. Its more than 75 families worship the same almighty God as their forebears with dedication to “becoming like Christ and making Him known.”