Cheryl Reedy and Michael Gill Honored at Board of Selectman Meeting 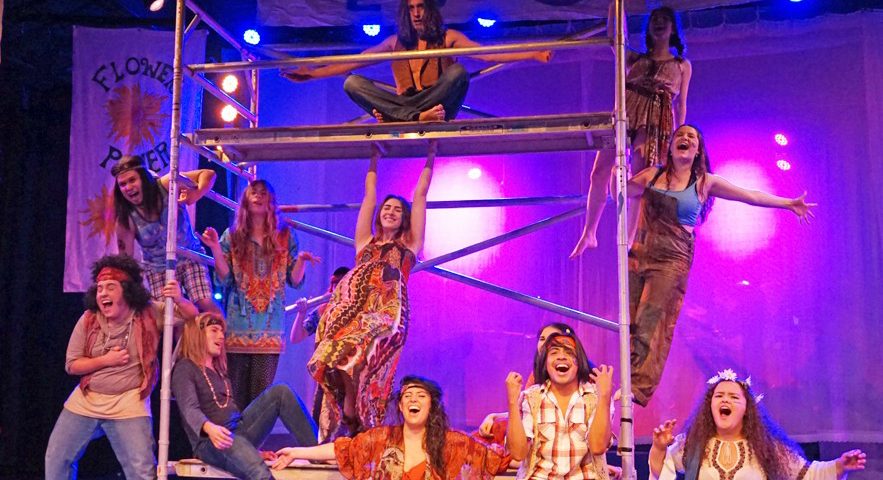 The cast of HAIR blew the roof off The Sherman Playhouse opening night and “let the sunshine in.” An electric performance that literally could not be contained on stage, accompanied by a rockin-hot band that brought the epic music of the sixties front and center! This show will ignite your soul and let your spirit fly!

HAIR debuted in 1967 at Joseph Papp’s Public Theater in New York City’s Greenwich Village and opened on Broadway in April of 1968 at the Biltmore. HAIR was written by James Rado and Gerome Ragni with music by Galt MacDermot. Using a combination of their own friendship, people they met in the streets and their imaginations, Rado and Ragni wrote a musical that reflected what was going on at the time – blurring of sexual boundaries, use of illegal drugs, disregard for the American flag, and profanity. Through this music, we join the “tribe” of politically active young hippies living in New York City and resisting conscription into the Vietnam War. Claude, his friend Berger, their roommate Sheila and their friends try to balance love, the sexual revolution and their rebellion against the war with the conservative stance of their parents and society. Claude must decide if he will resist the draft as his friends have done, or risk his life and serve in Vietnam.

This is a play about youth and counter-cultural ideas. The actors that comprise the thirteen hippies of this cast are young, energetic, and enormously talented. With clear, bell-tone voices they weave a story out across the stage and beyond as though they are a tribe, together since birth. They are in sync and although their movements are wildly free you see the timing, work and unbounded skill behind each step. Rarely can a cast this large be cohesive, dynamic and superbly entertaining.

Ray Cook as Berger and Joseph Devellis as Claude are the lynchpins for the story and bring a fresh exuberance to their roles. Ray Cook’s Berger is carefree but with an “in your face” attitude that can edge toward cruelty. Mr. Cook’s voice is appealing and his performance is imaginative.

Claude is the conscience of the show, reflective, confused, trying not to care. Joseph Devellis gradually reveals the inner turmoil of Claude and the drastic decision he must make, focusing the audience on the fact that try as he might, his life is not that “free.” Mr. Devellis gives us a Claude that is playful, passionate and scared.

If enthusiasm were gold, Austin Wayne would be a rich man. His portrayal of Woof, a young man coming to terms with his sexuality, is high-spirited, funny and…perfect. He makes the song “Sodomy” joyful and the crazy gleam in his eye is worth the ticket price. You will smile every time the spotlight turns his way.

Stage “presence” is a gift that belongs to Alyssa Serrambana. Coupled with her knock-out voice you have a Sheila that keeps the audience in her grasp. Her performance of “Easy to Be Hard” is a show stopper.

There are many rich, enticing performances in this play. Maya Daley as Ronnie sensually starts the show with a mesmerizing rendition of “Aquarius.” Santiago De Gante as Hud and Lexic Barradaz as Paul make their US debut punching life into numbers like “Ain’t Got No” with their powerful voices, dance moves and comedic presence. Shea Coughlin (Crissy) gives an achingly lovely rendition of the song “Frank Mills.” Jerusha Wright (Jeannie), pregnant and humorously naïve is ideal in this role with skills that belie her years. Gabriela Jimenez (Dionne) is exceptional and her voice is golden. There are no weak performances here and to a cast member they shine individually on their own.

Although in smaller roles, Jocelyn Beard (Margaret Mead) and Chris Marker (Hubert and the Police) are delightful and bring just the right amount of “outside” flavor to the show including a clever preface to intermission.

Director Francis A. Daley has proven once again he is the master of complex theatre. A fifteen member cast and over thirty songs must have an experienced director to keep it tight, moving and looking effortless and Mr. Daley is more than matched to that task. Mr. Daley has literally taken a “tribe” and transformed them into the highest caliber cast of the season delivering a splendiferous production of HAIR.

Sex, Drugs and Rock N’ Roll – without them there is no HAIR, especially the Rock N’ Roll – it’s through the music we know the story. Under the musical direction of Morgan Kelsey, “The Band” ROCKED the house – Roger Post, Jake Siberon and Dennis J. Arcano (drums, different performances), Nicklas Dickerson (guitar) and Edward James Murphy (bass). Kudos to Nicklas Dickerson and his amazing Hendrix riff.

The set design by Leif Smith is genius in its simplicity housing the band on stage and leaving space for the spirited dancing of the cast skillfully choreographed by Marisa Caron.

Lighting, as much as music, is the pulse of the show and the lighting design by Peter Petrino/Petrino Designs is astronomical. As always a tip of my cap to Al Chiappetta who is not only the producer of this play but the clever Wizard of the Light Board in his realm on high.

I know, it’s impossible to believe, but I was in the audience at the Biltmore for HAIR on Broadway in 1968. So I was skeptical about this production packing a punch fifty years later. But, hey, this is The Sherman Playhouse and they know how to do it big, bright and bold. This is the play to see this summer! Join the cast of HAIR and rock out to the tumultuous, rebellious, crazy-fun of the sixties.