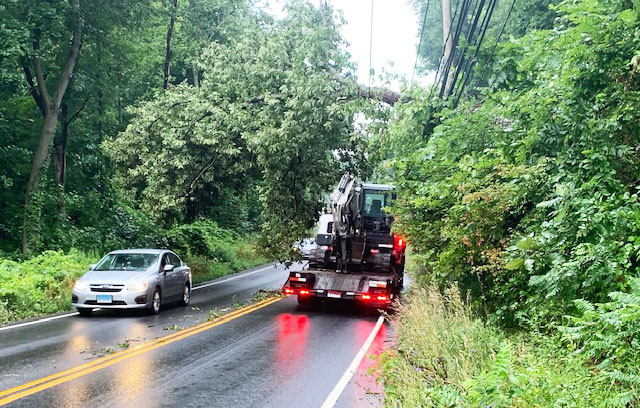 What most people thought was going to be a mild storm quickly turned into a hurricane and then downgraded, as Tropical Storm Isaias made landfall last week, causing damage, destruction, and left hundreds of thousands of people without power.

Tropical Storm Isaias brought torrential rain and damaging winds to much of the Northeast, and in particular to Connecticut, where residents suffered power outages, downed trees and power lines, and property damage. Many people lost power last Tuesday, when the storm hit Connecticut. “The magnitude of the storm was a shock to all of us,” Mike, O’Toole, the Assistant Chief of the Ball Pond Fire Department tells the Town Tribune in a phone interview. “We thought it might be a couple of downed power lines, but this was a reminder of the microburst we had last year and the damage it did.”

As of this writing, there are still residents that do not have power. The New Fairfield Volunteer Fire Department is working in conjunction with Eversource to ensure that power is restored—and more importantly, that everyone is safe. Of course, that also depends upon townspeople to ensure that they practice the proper safety protocols. Among those is using a generator safely. “Generators need to be installed professionally, and it requires an electrician to do it the correct way,” says O’Toole.

The other issue is that generators might not be used in the safest way possible. Since generators emit carbon monoxide, homeowners need to distance the machine from their homes.  “The generator has to be at least 30 feet from the house,” advises O’Toole. That might explain why some residents wondered why their carbon monoxide alarms were going off. “They thought their alarms were malfunctioning, but it was really detecting carbon monoxide,” he says. And equipment such as grills, camp stoves, or other gasoline, propane, natural gas, or charcoal burning devices should only be used outdoors and far away from your home. Carbon monoxide is colorless and odorless, so if you begin to feel weak, sick, dizzy while using any equipment, get outside and into the fresh air immediately.

After the storm passes, you might want to survey the damage—but you shouldn’t. “When the storm was over, everyone in the world was walking outside with their dogs and kids, but walking around makes it worse, since it’s a safety issue,” says O’Toole. “You have to be careful of power lines, which might still be live, in case someone is backfeeding.” Backfeeding is the process where the generator is illegally connected to an outlet, which allows power to enter the main panel and then circulates back out to the transformer, thus adding thousands of volts to the power lines. Not only can this potentially cause the electrical pole to catch on fire, it could also possibly electrocute a worker who is fixing the line.

If you are planning to go out to get essentials, you may want to speak with a neighbor to see how the roads are where they live. After all, side roads might not be cleared as quickly as main ones. “Main roads are the priority because we have to ensure that people have access to the hospital or that they can get their prescriptions,” says O’Toole. And if you spy a barrier or a blockade, there is a reason for it being there. “They are there for a reason, and still we find people taking them down. But everything must be treated as a live wire, until we hear otherwise from Eversource.”

Sadly, some New Fairfield residents are sadly still without power. That’s why you should check in on your fellow residents to see how they’re doing and what they might need. “We have a lot of elderly people who live in this town, and some are on oxygen machines,” says O’Toole. “When the storm happened, we worked with Danbury Hospital to bring them oxygen bottles to help them.” If you can’t get out, you can always call the New Fairfield Police Department and ask them to do a welfare check on your neighbor or loved one.

Hopefully, Tropical Storm Isaias is the only hurricane we’ll have to face this summer. Still, it’s always a good idea to be prepared for future storms if (and when) they come. “It’s important to keep an eye on the weather and be prepared by having your emergency backup ready,” says O’Toole. “They’re saying that it could be a bad hurricane season.” The Fire Department encourages all households to make a supply kit in case of an emergency, including the following: food, water, clothing, flashlights, batteries, a first aid kit, and possibly a radio to stay informed. Seniors should have a list of all their medications as well as an extra pair of glasses, and even batteries for hearing aids. And above all, stay inside, where it’s safe, until the storm passes.