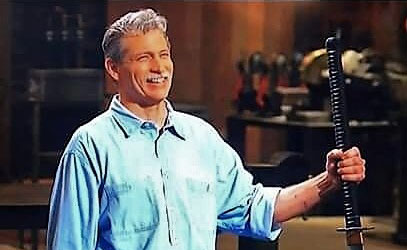 Sherman resident Dave Parthemore has won a reality TV invitational tournament featured on the History Channel series “Forged in Fire”, a program which centers on competitions between bladesmiths who, each episode, are tasked with forging unique weapons.

Parthemore, a metal-worker by hobby and trade, won the first-place championship title on season five’s episode 33, as well a first place in the invitational tournament on the following episode—episode 34—which aired on Wednesday, October 24 and Wednesday, October 31, respectively.

“I contacted them,” said Parthemore in an interview. “I watched the show—I’m a big fan—and I knew I had the skills and could do this… So I saw the casting people on the program, and I looked them up and sent them an e-mail telling them who I was and that I was interested in the show… To my surprise they got back to me in a couple of days, and that’s where the whole process started.” Parthemore explained that he was accepted onto the program in early June.

“The next thing you know, I’m competing,” he said. “I worked through the metal-workers’ bracket, became champion of that, and then I went to compete for the title of champion of champions, which was part of a contest between a farrier group, a blacksmith group, an armorer group, and a modern metal-worker group. And I won!”

Parthemore, a resident of Sherman for roughly 17 years, has been a metal-worker since he left the Marine Corps in 1980. He began as a welder, and later developed an interest in blacksmithing and forging.

“I got into artwork and sculpture and blade-making,” he said.

For work, Parthemore primarily makes custom horse bits and spurs for Raymond Maheu Welding in Pawling, New York; in his spare time, he mainly enjoys creative blacksmithing, and has stated he would like to get more involved in bladesmithing. All in all, his career has been eclectic: Parthemore has made all sorts of products, from chandeliers and table frames to tomahawks and garden gates.

“I’ve done repair work for certain items and antiques,” he said. “I have done blades, yes… but, so far, blade-making has not been my main concern.”

He was delighted, however, to forge weapons on “Forged in Fire”.

“The tournament was terrific. It was great. The show is all about making blades. That was the whole gist of this competition: You had guys that were not dedicated blade-smiths… making blades.”

Parthemore started off on season five, episode 33, during which he was part of group of metal-workers, all competing against each other to develop a Damascus steel, needle-point dagger.

“We affixed handles to the dagger, and after you affixed handles to it they brutally test it to see if your piece can survive. And the two finalists out of the four that survived the testing—they go to their home forge for five days to create a weapon of the choosing of the program’s judges.”

The second half of episode 33 featured Parthemore facing off against Bethel resident Rick Rabjohn to develop a Flamberge Rapier. Parthemore won, and was able to pass on to episode 34, which featured the invitational tournament’s final round.

Episode 34 first saw four tournament finalists creating wakizashi, a type of Japanese short sword. By the end of episode 34, Parthemore and his competitor, Nicholas Cochiolo, had each gone to their home forges in order to create a nodachi, a very large Japanese sword. Their nodachi were put to the test by the program’s judges, and, ultimately, Parthemore won.

“It was a very, very close competition,” said Parthemore. “My competitor built a beautiful weapon, and it was by the smallest of margins that I was able to get the victory.”

Parthemore, who is seeking to retire in the next few years, is looking forward to forging, smithing, and metal-working as a creative pursuit. He’s also inclined to make something of a business of his work.

“I can see myself getting into business at some point. This has come at a perfect time: in four years I’m going to retire, and I’m going to be able to go out to my own forge and be creative in my own time. It’s a wonderful new thing to go into.”

Parthemore has also undoubtedly been inspired by “Forged in Fire”.

“Blade-smithing is probably going to become much more of a primary pursuit in my future endeavors,” he said.