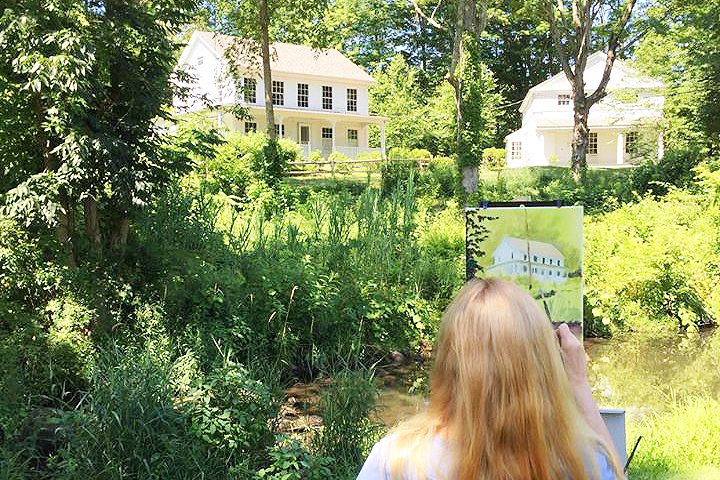 Plein Aire painting of the Parsonage

NEW FAIRFIELD – The Candlewood League of Artists (CLA), an association of visual artists from the New Fairfield area originally established in 2002, reformed this year after a 12-year hiatus. (The group disbanded in 2006.) Newly regrouped, the CLA, which has between 18 and 20 members—and growing—as of July 30 of this year, is planning several events to be held in New Fairfield and the surrounding region. At a meeting of the League’s board members held this past Monday, July 30, at New Fairfield’s senior center (33 Conn. Rt. 37), some of the finer details of these events were discussed.

The group discussed three events, one of them recurring: August’s plein aire painting session, an art show coinciding with New Fairfield Day, and a juried art show to be held in November.

The plein aire (French for “outdoors”) event is a monthly outdoor painting session open to CLA members and those interested in becoming members. The last session was held on the morning of Tuesday, July 10, and this coming month’s session will be held on the grounds of the New Fairfield Senior Center on Tuesday, Aug. 7, from 9am until an undisclosed time, though likely 2pm

“We used to do them all the time,” said Tomanelli of the plein aire sessions.

The finer details of the New Fairfield Day art show, so named for its coinciding with that day commemorating the town, are still being worked out, but the event will likely feature a showcasing of CLA members’ portfolios, and will potentially include art for sale.

“Members will bring their own setup,” said Medeiros. “Their easels, portfolios, and so on.”

The art show will be held in New Fairfield, featuring member artists’ work displayed on the walkway.between the New Fairfield Library (2 Brush Hill Rd.) and Senior Center, on Saturday, Sept. 15, with a rain date backup of Sunday, Sept. 16.

“It’s done for people in town to see what we’re about,” said Tomanelli of the show.

Medeiros noted that, alongside the publicity the art show will provide for the CLA, it will also bring attention to the New Fairfield Senior Center and the town of New Farfield as a whole, as well as “the town’s commitment to the arts.”

The CLA is considering developing and distributing a newsletter advertising the New Fairfield Day show.

Lastly, the group discussed their first annual juried art show. It will be held on Saturday, Nov. 3.

Alongside Warwick, the CLA was co-founded by New Fairfield resident and painter Florence Froder. Its 2018 reformation was made by possible by a “generous endowment” donated by the estate of the late Sherman resident Barbara Goodspeed, a well-known area watercolor artist.

While the CLA does not yet have an official website—Keltos is beginning to work on one—the group does maintain a Facebook page, which can be found at facebook.com/pages/biz/art/The-Candlewood-League-of-Artists-200031177325787/.

Membership in the CLA is open to visual artists of all kinds, and is free for the first year, until June 2019. While an official membership price has not yet been decided, it is likely to be around $30 per person per year.

The group is currently in the process of developing and distributing membership applications, some of which will be sent to the New Fairfield Library.

For inquiries, or to apply to join the League, contact Elisabeth Smith at lizart123@gmail.com.