Teacher Misconduct a Specter Over Board of Education Meeting; Data Shows Student Growth and Achievement in NF School District 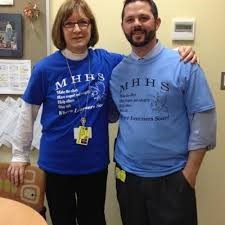 Board members discussed four budget points at length before making final adjustments to the proposed budget. First, the need for repair to the High School’s tennis courts was addressed with Dr. Roy describing four potential solutions, ranging from $180 to $300K.

Though little justification was needed to establish the importance of fixing the courts, there was a bit of debate regarding the costly repairs and the potential to possibly share costs with the town’s budget, considering that the public often uses the courts. Second, the Board agreed to increase the special education contingency budget amount to $100K, in line with what it is this year.

The initial budget optimistically cut that amount in half, but the Board chose to keep it at a more conservative estimate. Third, the Board considered the proposed $33K for kindergarten computers. Dr. Roy explained that the plan is to make touchscreen Chromebooks available to kindergarten students for a number of teaching opportunities. The Board agreed to keep the item in the budget, but asked that Dr. Roy, along with technology staff, devise a plan to thriftily spend the money with an emphasis on a mixture of devices that can be shared. The Board also asked that a broad technology plan be developed to assess technology inventory lifespan and best use.

Finally, the Board addressed the proposed budget’s new Safety Advocate positions. After researching similar positions in neighboring schools, Dr. Roy revised the salary requirement, and members agreed to reduce the proposed budget to $64K, from $100K, for both. Board members stressed that particular care needs to be taken in finding the right staff for these positions. It was suggested that retired police officers may be a good fit. While everyone agreed that student safety is the number one priority, there is concern regarding how best to increase the efficacy of these positions.

The Board also quickly agreed to increase substitute teacher pay to a competitive $90 per day in next year’s proposed budget. And briefly touched on the importance of the Middle School rooftop air conditioner repair and various high school upgrades.

In public comments, Patrick Bower stood up and expressed concern regarding alleged teacher misconduct at the Middle School. In particular, Mr. Bower was asking for better communication from the administration on safety issues, such as the alleged occurrence, that may pertain to the students at large. After an Executive Session, Dr. Roy noted that although she cannot speak about specifics, parents should be assured that any issues that arise are speedily addressed.

Meeting House Hill School principal, Sarah McLain, formally announced her plans for retirement at the close of the school year. She noted in a bittersweet speech that moving on to the next phase in her life is exciting, but that she will greatly miss “…the smiling faces of the Meeting House Hill School learners as they arrive off the buses in the morning.” She also expressed “…tremendous pride in being part of a team of professionals who come to work each day and do their very best in educating each and every child.” Dr. Roy thanked Ms. McLain for 23 years of excellent service as principal of Meeting House Hill School.

Policy Subcommittee members detailed several slight shifts in policy language that needed to occur in reaction to the CT General Assembly’s Public Act 16-147 and ESSA, the Every Student Succeeds Act, which replaced No Child Left Behind. In addition to the language changes, subcommittee members described a new policy regarding religion and religious accommodation. Board members discussed possibly asking social studies faculty from the High School to review the policy language, as their classes most often address religion.

Dr. Roy noted that New Fairfield Public Schools was the recipient of a risk management award for prioritizing and establishing safe working conditions. She also applauded several student and teacher awards and noted many positive upcoming events in the schools.

Students from the High School gave an update on their efforts to establish the House of Rebel-sentatives, a group of approximately 75 students that will meet tri-annually to identify issues that they would like to discuss with the Board of Education. Within the larger group of Rebel-sentatives there is a smaller Senate who will be responsible for filtering and feeding information to the Board.

The Community Outreach Subcommittee issued an open invitation to the public. Their next meeting is scheduled for Thursday, March 2.

The next Board of Education meeting is scheduled for tonight, Thursday, February 16.