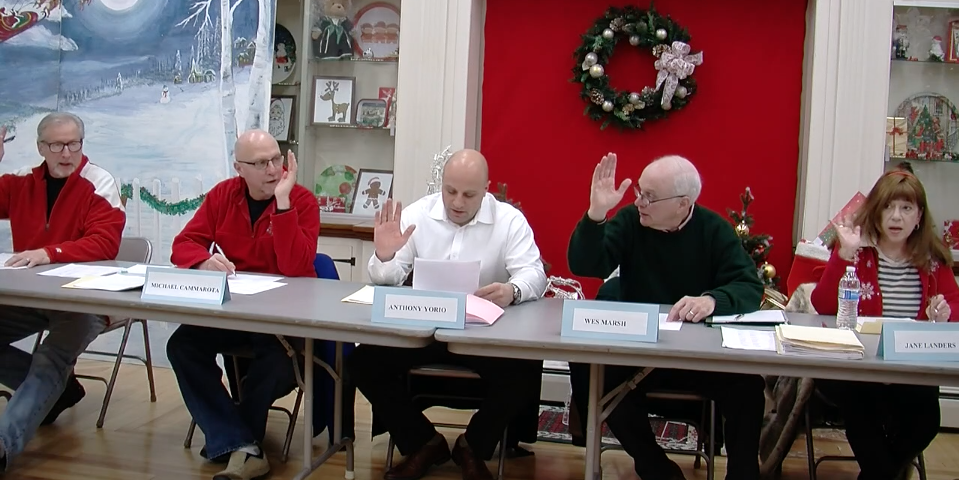 The Board of Finance’s final meeting of the year was held December 21st in the community room at the New Fairfield Public Library. The primary focus was the discussion of the 2017-18 fiscal year budget.

Chairman Wes Marsh outlined four areas of the BOF budget; salaries, particularly that of the Recording Secretary; Town auditor, materials and supplies; and the Contingency Fund.

For the past two years, the cost of Town’s current auditors, PKF O’Connor Davies, LLP, has remained at $52,000 per year. Board member Jane Landers indicated she would like that to remain the same in 2017-18. Chairman Marsh said he would like to see them continue with the current firm rather than go to bid.

The last time the Town had an RFP for an auditor was four years ago. Ms. Landers stated that O’Connor Davies were the clear winners at that time, saying they were very thorough in their preparation, reviewing meeting minutes, previous budgets, etc. Mr. Marsh agreed, saying that they came prepared with a binder of New Fairfield facts and that their presentation was more customized that the other bidding firms. Mr. Marsh indicated he would like to ask O’Connor Davies to hold or reduce their price.

Board member Anthony Yorio asked if the board would have enough time to go out to bid if the auditors raised their current price. Mr. Marsh responded that they have until October.

Ms. Landers made a motion to give O’Connor Davies the chance to keep the same $52,000 price as last year to audit the Town of New Fairfield. If they won’t, then the Town would go out to bid. Board member Michael Cammarota seconded. The motion was unanimously approved by the five members present.

The discussion turned to the Town’s $33,000 Contingency Fund. Board member Michael Cammarota asked if the Town had ever used the fund and if it needed to keep so much. Mr. Marsh asked Mr. Cammarota if it was to be reduced, how much should that be.

Mr. Cammarato said that since it has rarely, if ever, been used he would suggest reducing it by half. Mr. Marsh said that he would review contingency fund amounts in other towns and what they have used them for and bring that information before the Board for further discussion at the January meeting.

The second agenda item was a discussion of the RFP for the Insurance Consultant contract. The RFP was sent out on December 16 and bids are due back by January 17th. Gallagher Benefit Services is the current consultant for the Town.

Mr. Yorio noted that he would like to see better itemization and more detail including date and time for items itemized on the bill as well as a description of activity. Ms. Landers agreed.

Mr. Marsh reviewed other ongoing items. The Medical Reserve Fund balance is $3.3 million. Generally, 20% of projected claims should be kept in the Medical Fund. Projected claims are $6.2 million, so there is an excess in the fund now. There was some discussion about possibly moving some of the excess into the General Fund. It was decided that this will be discussed at budget time.

Expenses were reviewed by the Board and Mr. Marsh noted that the Communications Center overtime line item was reduced.

Revenue for licenses and permits increased, a sign that there is increased building activity in town. Real Estate Conveyance and Town Clerk receipts are also in good shape.

Mr. Marsh said that he had attended the BOE Business Operations meeting where non payroll items were discussed. He presented the new BOF General Fund Policy to the entire Board of Ed at their December 15th meeting.

The meeting concluded with the Board wishing everyone Happy Holidays.