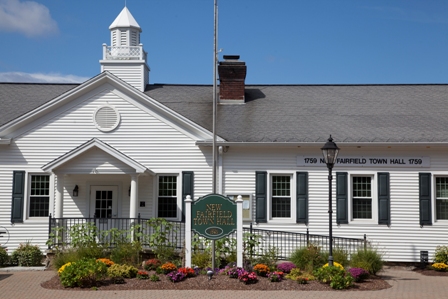 A public hearing preceded the regular Board of Selectman meeting on a snowy February 9th. The purpose of the hearing was to provide information on a $400,000 Small Cities Grant in the Housing Rehabilitation category applied for by the Town.

Small Cities Consultant Lisa Low reported that money received from the grant would be used to fund the Town’s Housing Rehabilitation Program. Since 1991, this program has been used to assist low income families in New Fairfield with repairs to their homes. The assistance is in the form of 0% interest loans used to finance health and safety improvements, such as septic repairs.

First Selectman Susan Chapman asked when the Town would hear if its application had been approved. Ms. Low said she expected to hear in July. If approved, funds should be available in October. Anyone interested in applying for the Town’s Housing Rehabilitation Program can contact Lisa Low & Associates at 203-888-5624 or visit the Town of New Fairfield website (www.newfairfield.org) for information about the program.

The regular Board of Selectman meeting followed the hearing. First Selectman Susan Chapman began the meeting by praising the Public Works Department for the great job they did in clearing the snow during the day’s snowstorm.

The Board voted to set a date for a public hearing on Thursday, March 2nd at 7:00 pm in the Meetinghouse Hill School. The purpose of the hearing is to discuss the proposed herbicide and algaecide treatments for Candlewood Lake for the 2017 season. Consultants will be present to discuss the proposed treatments and to answer questions. Those looking for more information on the meeting can contact the First Selectman’s Office at 203-312-5600. Information on the proposed treatments can be found on the Town’s website.

A resolution to apply for a Small Cities Grant in the amount of $400,000 in the Housing Rehabilitation category was approved by the Board. It also appointed an Ethics Committee to review an unspecified ethics complaint. Charles Seitz, Ernest Lehman and Sean Breslin were appointed to the committee.

First Selectman Susan Chapman moved that the Board release the remaining balance of funds owed to the Candlewood Lake Authority (CLA). In the discussion that ensued it was noted that the CLA has adopted a more transparent accounting system and software that has alleviated to some extent financial concerns that the BOS had.