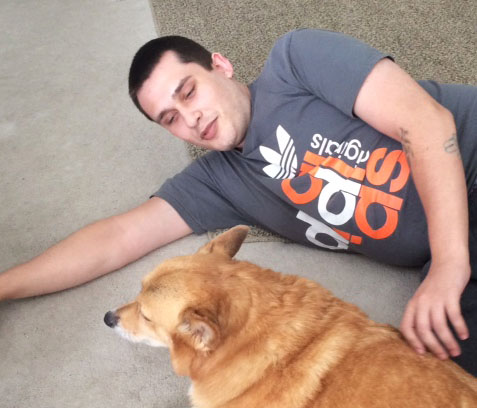 Eric with his dog, Brandy

Throughout his short life, New Fairfield resident Eric James Mitchell had a strong love for animals.

“When Eric was 13, he picked out a Pembroke Welsh Corgi, Brandy, who I still have,” recalled Eric’s father, James [Nick] Mitchell. “She is over 13 now, and her back legs are paralyzed, so I have to carry her up and down stairs. Since she was Eric’s dog, I want to keep her as long as I possibly can.”

Sadly, in January, Eric passed away at the age of 25 from a pulmonary embolism. The embolism was a result of a broken leg from slipping on ice a few weeks prior to his death.

Given Eric’s strong attachment to animals, it wasn’t surprising that after his tragic death, his parents — James (Nick) Mitchell and Linda Washington, along with Linda’s husband Gary Washington — decided to donate $15,000 to the New Fairfield/Sherman Animal Shelter in Eric’s name. Eric’s savings also contributed to the donation.

“We hope this contribution in Eric’s honor will keep his memory and his love for animals alive, and help shelter animals end up in good loving homes,” Mitchell said.

A plaque is displayed inside the shelter in memory of Eric.

Eric’s mother fondly reminisced about Eric’s strong affection for animals. “The way Eric would be around animals was pure joy. He was trusting and extremely compassionate towards them — especially if they were homeless or underprivileged in some way,” she said.

Growing up, Eric was surrounded by animals. He had two dogs — Lady was a Collie and Brandy is a Corgi. He also had between 12 and 15 cats. According to Washington, their family would get their pets from animal shelters.

“We got our 16-year-old cat Dee Dee — a black and white tabby — from the animal shelter in New Milford when she was just six months old. Eric picked her out,” Washington said.

Eric graduated in 2009 from New Fairfield High School and went on to study mechanics at Porter & Chester Institute in Watertown.

Washington said one of her son’s most admirable traits was his generosity. “Those who knew Eric closely knew he had a big heart,” Washington said. “He has always been a really sweet, giving person ever since he was a little boy.

Washington recalled the times Eric would give away his toys to friends who were less privileged than him. “I would have to call them and ask if his bike was there, or his walkie talkies or game machine,” she said.

One of Eric’s hobbies was riding. “He was always interested in anything with a motor — mini bikes, golf carts, motorcycles and cars,” Mitchell said. Eric and his father have ridden motorcycles together for the past four summers, beginning right after Eric got his motorcycle license.

Mitchell recalled wonderful memories of bonding with his son over riding. “We would ride on the back roads up through Kent, Warren and Sharon, and eat lunch in Millerton NY, on many weekends,” he said. “We went to a few different places for lunch, but we [especially] liked Four Brothers Pizza Inn in Millerton.”

When Eric passed away, Harley-Davidson of Danbury bought back the motorcycles Eric and his father rode together. The family used the amount they received from the sale towards the animal shelter donation.

A second hobby Eric had was fishing. “Eric was an avid fisherman ever since he was old enough to hold a fishing pole,” Mitchell said. “Every year he and I would go out to Washington state, where my family is from. The highlight of the trip for him was fishing for trout and steelhead, and going on at least one salmon charter at the mouth of the Columbia River out of Ilwaco, Washington.”

Washington said her son was an extremely sensitive person. “I think he recognized in animals their lack of judgment and expectations of him in life. He knew that if he was kind and affectionate, they would give him unconditional love,” she said.

She added that Eric would have been pleased to know where the donation went. “I think because he trusted and loved animals so much, he would be really happy that we are doing this.”