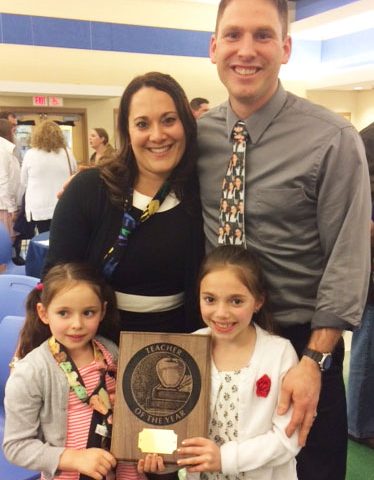 On Thursday, May 25, the Board of Education hosted a superhero themed “Celebration of Excellence” to thank and congratulate the district’s teachers and staff. The event included Service and Shining Star Awards, dedicated speeches for retirees, and the announcement of the district nominees and winners for Staff Member and Teacher of the Year.

The audience waited until the end of the affair for the news that Matthew Schlosser, 5th grade teacher at Meeting House Hill School, was named Teacher of the Year. His colleague, Jeff Guiliano, lauded the many characteristics that make Schlosser a standout teacher. He emphasized the remarkable connections Schlosser makes with his students. Quoting emeritus faculty member, Jim McCray, Guiliano noted that “It’s not important to be the teacher of the year, it’s to be the teacher of their life,” –a tenet he believes Schlosser teaches by. A competitor at heart–he’s the boys’ JV Basketball Coach at the High School–Schlosser pointed out that it has been 17 years since a teacher at MHHS had won. In a nod to tradition, Schlosser was given a white rosebush to symbolize the purity of the teaching. Schlosser now goes on to complete an application to compete for Teacher of the Year at the state level.

Board member Amy Tozzo announced the district Staff Member of the Year, MHHS paraprofessional, Lisa Marra. Ms. Marra was described as remarkably flexible, kind, and patient. She’s known as a go-to person for substitute shortages, for never complaining, and for always saying “no problem” when issues arise.

First Selectman, Susan Chapman, read a proclamation and citation to introduce this year’s 8 retirees. They include MHHS Principal, Sarah McLain; NFHS Music Director, Scott King; NFHS Guidance Counselor, Katherine Luce; NFHS Nurse, Peggy Katkocin; NFHS Art Teacher, Karen Kollar; NFMS Nurse, Susan Ligouri; and Consolidated Psychologist, Lori Wilson. Their colleagues all had lovely thoughts about time spent working with each of them, about their contribution to the schools and their impact on multiple generations of student’s lives, and wished them well in the future.

2016 Teacher of the Year Christopher Tait opened the ceremonies, by reminding everyone that they were there “to celebrate great teachers” and they proceeded to do just that. Building Teachers of the Year nominees were applauded: Lindsay Mapes, 1st Grade Teacher at Consolidated; Casey Olsen, Science Teacher at NFMS; and Cathleen Rekos, Social Studies Teacher at NFHS. Staff members of the year nominees were equally showered with praise: James Hunt, Custodian at Consolidated; Jennifer Roche, Secretary at NFMS, and Lori Vengalli, Paraprofessional at NFHS. Shining Stars were given to NFHS Italian Teacher Clare Bryan for her designation as Distinguished Teacher for the US Presidential Scholar Kristen Richichi, Art Teacher Rosanne Main for a state-level yearbook award; NFMS Psychologist, Bibi John and Guidance Counselor, Amy Jacques for their work on establishing a Unified Theater program; and MHHS Physical Education Teacher, Casey Aiezza, for winning an alumni award at Springfield College. Dr. Jason MacKinnon, Chief Academic Officer, awarded team pins to teachers Ashley Burke, Owen Lucas, and Andrea Barkley.

In closing the ceremony, Dr. Alicia Roy wished everyone a great end-of-year and wonderful summer.