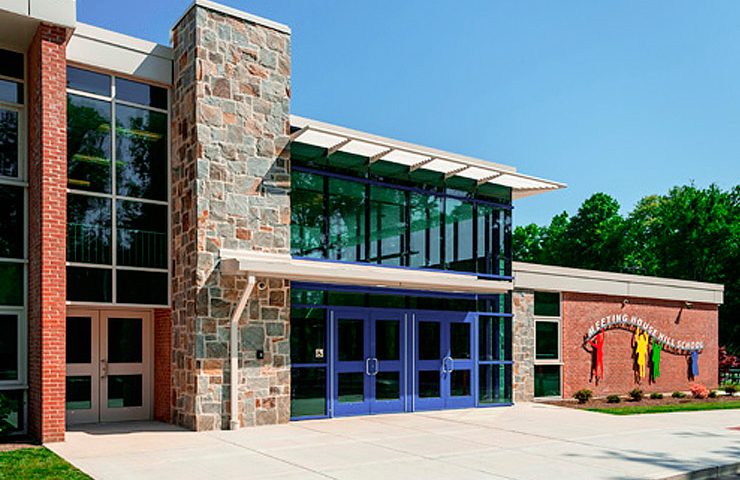 At their April 6 meeting, the Board of Education announced that James Mandracchia has been hired as the new Principal of Meeting House Hill School. Dr. Alicia Roy said that the search committee unanimously agreed that Mr. Mandracchia was the person for the job. Among his accolades as a teacher, math specialist, PBIS leader, and assistant principal, Dr. Roy stated that “Mr. Mandracchia is very well liked for his knowledge, his calm demeanor, his listening, his communication skills.” Dr. Jay Voss concurred in Board member comments later, saying “You’re one of the few people I think I’ve ever met in my life who talks in a constantly calm manner, but there is passion in almost every word.” Mr. Mandracchia was grateful and honored to accept the position and says that he is happy to serve the community. He said that he believes that “as a leader…your job is to be serving your staff and your students and your families.”

Ed Sbordone gave a brief summary of the recent BOF meeting, highlighting the  4-2 vote to cap the town tax increase at 3.99%. He noted that the BOF will do a final markup of the budget on 4/19. In order to prep for the 4/19 meeting, and assuming that there is a 0% increase, the BOF requested a priority list of items that might be restored from the original budget, if there is any room for them to add items back in.

Dr. Roy and the Administration presented a list of six items to restore, in priority order: Math Teacher at Consolidated, STEM coach at Middle and High School, Technology Teacher at Consolidated, District Transition Teacher, Special Friends Paraprofessionals, and Safety Advocates. All Board members agreed that these are important positions, but there were many opinions regarding the priority order. In the end, the Board unanimously agreed to give the BOF the list of six critical positions with an equal ranking of importance and in no particular order. In his Chairman’s report, Steve Burfeind thanked the community for the outpouring of support for the BOE’s proposed original budget.

Chief Academic Officer, Dr. Jason McKinnon, presented a proposal to adopt two new textbooks for K-8 science. He reminded the Board that the state has adopted the Next Generation State Standards and that testing to those standards will begin in 2018. At this point, the town’s science curriculum only meets 30% of the new standards. After researching several options, McKinnon, and the team assigned to identify a new curriculum, has come to the conclusion that our system would be best suited to the Foss textbook for grades K-3. Foss is a inquiry-based, hands on program that puts the child in the role of scientist, down to the science notebook that they will use for observation. For grades 4-8, the team would like the Board to adopt the Dimensions textbook.

Dimensions is a rigorous program that will ready the students for state testing and future science classes in high school. For both programs there will be several days of professional development provided for the teaching staff. When asked by Board member Samantha Mannion whether there are accommodations and teaching methods for special needs and struggling students, McKinnon stated that there are “embedded tools” in the programs to help those students and that teachers will be able to identify levels of proficiency in a five recent developments on the insurance program. First, is a new wellness program for members, including incentives for handling health issues. Second, they’re introducing “Walking Works,” a rewards-based competitive program that involves tracking steps. Third, they are negotiating HSA contribution amounts. The fourth new item is a comparison of health plans that all members can access. And, finally, they will offer Q&A sessions for the teachers and staff.

The Policy Subcommittee met to draft three new policies and three policy revisions. The new policies include: 3230.1 (fiscal compliance for Federal grant funds); 3281.2 (online funding and campaigns); 5118.3 (importance of collaboration between caregivers, schools, and children in foster care). Existing policies will be modified to add language to: 3280 (online gifts and funding); 4218.14 (prohibits discrimination against staff members with disabilities); 5145.4 (non-discrimination against children with disabilities under section 504). Board members will review all of the policies and will discuss them further on Thursday, 4/20, and a third read and vote in planned for Thursday, 5/18.

At the Special Ed Ad Hoc Committee meeting, the members and community greatly appreciated a presentation by special ed teacher Brian Cragin on IEP goal development and monitoring. They are continuing to have engaging discussions on a range of topics, this meeting’s included Unified sports offerings,  the possibility of expanding world language programs for special needs students, and more.

High School students attended the meeting to present the Board with a thank you card for the transformative capital repairs to their art facilities. Where they had been using an antiquated dark room for photography, they now have a fully functioning computer lab equipped with all of the latest software needed for digital photography and publishing.

MHHS students presented on a project that they recently completed for Sherman-based Matthew’s Hearts of Hope, creating heart-shaped pillows for children who are born with congenital heart defects. High School students sewed fabric for 190 pillows, leaving an opening for fill and MHHS students added polyfill and sewed the pillows closed. Matthew’s Hearts of Hope has been influential in passing legislation for mandated newborn pulse oximetry screening to detect defects. The organization has also helped numerous hospitals with generous grants.

In parent comments, Kim LaTourette thanked the teachers and administration for the many engaging recent activities in various schools and for inviting parents into the schools to take part in events. Laura Consiglio relayed that the Special Ed Ad Hoc Committee meeting was particularly informative. She also noted that there was a discussion about recognizing the signs of dyslexia, and she urged the Board to keep abreast of any new programs that will help to train faculty on how to identify and teach children with dyslexia.

The next Board of Education meeting is scheduled for Thursday, April 20.