In the Theater: Hedda Gabler at The PACBox (Performing Arts Center); Written by Henrik Johan Ibsen, Directed by Robin Frome 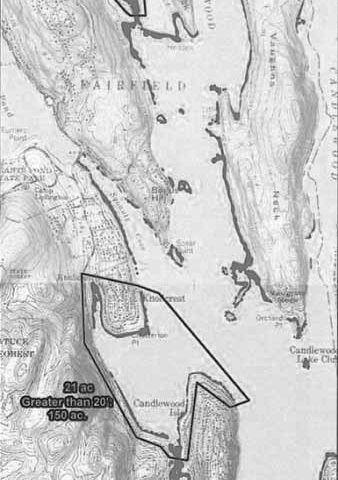 The areas shown in the map (above) are recommended for the 2017 treatment program by SOLitude.

A small group of concerned citizens attended last week’s Board of Selectman meeting to voice their opposition to a contract made with SOLitude Lake Management to use herbicides in portions of Candlewood Lake in an effort to curb the growth of Eurasian Milfoil.

During the public comment portion of the meeting, Jim McAlister addressed the Board. In a prepared speech, he noted his opposition to the use of chemicals in the lake. He indicated that many other residents were also opposed, citing an online petition that to date has garnered 2,492 signatures. Mr. Mcalister also stated concerns over how chemicals would affect homeowner wells and the health of children swimming in the lake, saying that there are less intrusive alternatives to chemicals and that the potential risks outweigh the rewards.

Bob Stryker also addressed the Board, questioning the legality of appropriating funds and signing a contract with SOLitude prior to the public hearing scheduled for March 2nd. He cited an October 13th town meeting where $30,000 was approved for “lake studies”. This amount constitutes a portion of the $52,000 contract signed by the Town. Mr. Stryker was upset that the process had not been transparent and that it was not clear that the purpose of funds approved at that town meeting would be to treat the lake with chemicals.

Mr. Stryker also noted that even so, the remaining $22,000 had not been approved at a town meeting and that according to state statute any contract greater than $10,000 had to be approved by a town referendum before being executed. He said that when he called the Selectman’s Office, he was told that the contract had already been signed. At the prior BOS meeting, a public hearing was scheduled for March 2 at 7:00 pm at Meeting House Hill School.

The Board did not respond to the comments. However, in a phone interview First Selectman Susan Chapman said that a contract with SOLitude has not yet been executed. Ms. Chapman also indicated that the terms of the pending contract stipulate an amount “not to exceed $52,000”. To date, the only funds earmarked for this project are the $30,000 already voted upon at last October’s public hearing. The other $22,000 is contingent upon a grant from FirstLight, which has yet to be awarded. Ms. Chapman stressed that no other town funds would be used for the project.

Three points make up the bulk of SOLitude’s proposal. As stated on the firm’s proposal letter they are:

1. Eurasian Watermilfoil Control: use aquatic herbicides to control Eurasian watermilfoil and evaluate if the triploid grass carp will then preferentially graze on milfoil regrowth, as compared to the more mature old growth milfoil plants found in untreated sections of the lake.

2. Cyanobacteria Control: perform a series of limited area treatments around New Fairfield Town Beach to control cyanobacteria when it is present at low densities to try and prevent bloom conditions from developing that result in beach closures.

3. Monitoring and Assessment: work with the Connecticut Agricultural Experiment Station (CAES), Northeast Aquatic Research (NEAR), CT FirstLight and other project partners to design and implement monitoring programs to assess the effectiveness of the demonstration herbicide and algaecide treatments and to evaluate future management strategies.

The treatment would be scheduled for a weekday in mid-May before the opening of the town park when lake usage is low. Water use restrictions will be in effect directly following the deployment of the herbicide, specifically no use of treated lake water for drinking for three days, for domestic animal and livestock watering for one day and five days for irrigation. Treated areas should be closed to swimming for one day after treatment. Signs will be posted along the shorelines of treated areas and notification made in the Town Tribune and New Fairfield’s Town website.

SOLitude’s complete proposal and supporting documentation if available for public viewing on the Town’s website or by contacting the First Selectman’s Office ate (203) 312-5600. The agenda for the public meeting is available here and the lake management  proposal by SOLitude is available here.

The BOS announced a $10.949 million proposed budget for the upcoming fiscal year. This represents a 0.69% decrease from the previous year in anticipation of a probable cut in funding from the State. State cuts could be as much as $4.3 million. The proposed budgets of both the BOS and the BOE will be presented to the public on March 4th.

The Board also presented the Julia’s Wings Foundation with a proclamation declaring the week of December 27 to March 5 as Aplastic Anemia Awareness Week in New Fairfield. The week will be marked by the foundation’s annual Operation Wear Red campaign. Aplastic anemia is a rare bone marrow failure disease that most commonly afflicts children and young adults. To find out more about Julia’s Wings Foundation and Operation Wear Red, go to www.juliaswings.org.