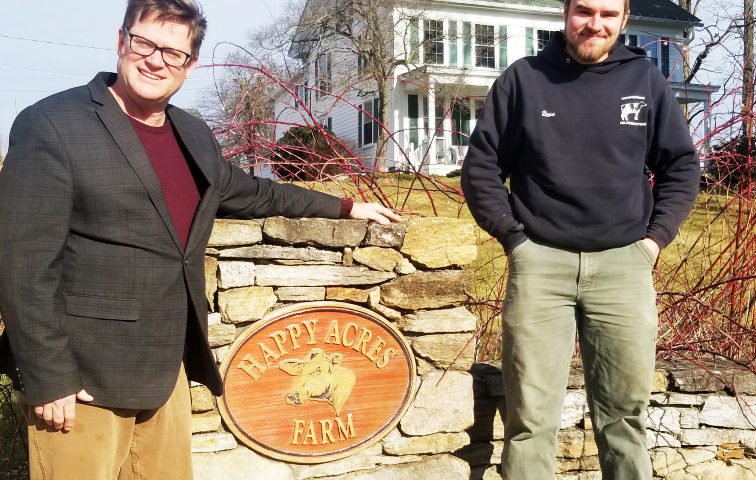 SHERMAN – Six candidates were interviewed by the Sherman Board of Selectmen at the December 15th Special Meeting for the Happy Acres Farm Manager position. Of the six applicants, First Selectman Don Lowe stated that the four local farmers were the strongest possibilities, stating the young men were “all extremely impressive…any one of them would be the perfect candidate for Happy Acres Farm.”

David Jellen has been selected as the new Farm Manager. Jellen, 21, has owned his herd of dairy cows for five years, but has been involved in farming since childhood; during his interview, he stated that he wants to see agriculture stay in Sherman and have the community involved at the farm.

Progress has been made in the farm’s reorganization, and recommendations have been made by not only the town’s attorney, but by the insurance company and its attorney, as well—one such suggestion was changing the position title from “Property Manager” to “Contractor”. At the start of the new year, the Board will be inspecting the equipment at Happy Acres to determine what will stay, what needs repair, and what will be disposed of. The condition of the house will also be evaluated to determine whether or not the former tenants receive their security deposit back, but, per the contract, no one was allowed to enter the house until January 1st. Keeping the utilities running until December 31st was decided to avoid any upset before the tenants had moved, and social media administration has not been changed to the Board. Lowe saw that the farm has been labeled as “closed” on Google, but said he’s receiving help from The Friends of Happy Acres.

The Board voted to sell the 55 cows currently living at the farm to Jeff and Pete Lescynski for the offered $18,000; the proceeds from the sale will go into the trust account. The building of a new silo, however, has, as of this publication, been put on hold. Though the decision to build the silo has been made, cost and contribution from the cell service providers have not been determined. Lowe added that when the item is brought to Town Meeting, the vote will be for the full amount of the project, and any funds provided by T-Mobile and AT&T will be reimbursed to the Town.

A request from realtors was brought to the Board to put assessor’s records online in July, and the matter was briefly discussed at the November regular meeting. A real estate field search is currently restricted to addresses only, a restriction which was dubbed “antiquated”, and only three towns in the research of close to 27 towns have reports of residents finding said field card search difficult. The proposed solution is to enable a search by name. Ostrosky countered that names connected to an address are constantly changing, but the address, itself, will not. Al Garzia said adding names to the search should cost close to $1000, but that the process would not be difficult, further suggesting the formation of an ad hoc committee to be responsible for continued research and reporting findings to the Board.

Recent legislation was passed allotting $20,000 for the six towns who purchased air monitors in response to Cricket Valley. Incorrect verbiage on the documents, however, listed Sherman as the sole recipient of the funds, and Lowe opened the discussion of whether or not the Board will be responsible for distributing the appropriate amounts to the other towns. None of the other Selectmen offered objections to the responsibility.

Ostrosky proposed, for future agendas, reviewing any legal obligation behind the Board’s sharing of correspondence. It was mentioned at both the beginning and the end of the meeting, and the final decision of the evening was to keep it in mind for future discussion, but to take no action at the current time. Lowe stated he’d continue to read and present at the meetings any correspondence the Selectmen received if they so desired.

Unanimously voted for were the approval of the November meeting minutes, as well as the tax returns totaling $497.25. It was also unanimously voted to reappoint Frank Galasso to the Inland/Wetlands Commission for another four-year term, and Ann Chiaramonte to the Zoning Board of Appeals for a term to end on January 1, 2025.

The next regular monthly meeting will be on Thursday, January 23rd at 7pm.