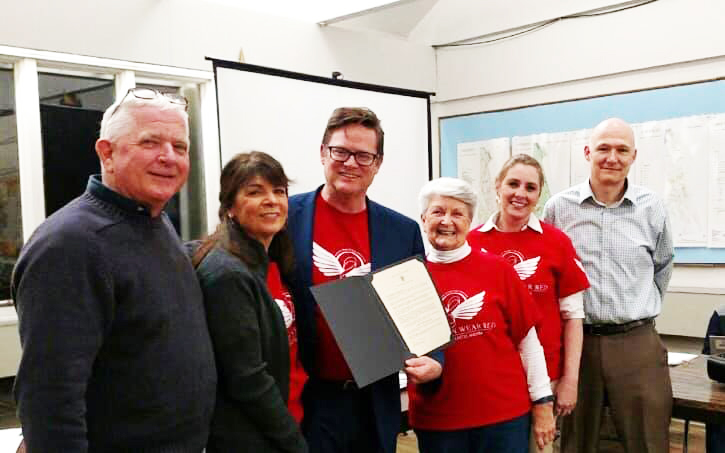 The Sherman Board of Selectmen, led by First Selectman Don Lowe, issued an official proclamation that declared March 3-March 9 as Aplastic Anemia Awareness Week in the town of Sherman. Photo by Julia's Wings Foundation

Representatives from Julia’s Wings Foundation (JWF) were presented with a proclamation from First Selectman Don Lowe at the Sherman Board of Selectmen meeting on Thursday, February 28th. The foundation was established in honor of Julia Malsin by her parents and sister in 2013 and offers financial support for families with children suffering from life-threatening hematological diseases, such as aplastic anemia. The JWF has raised over $150,000 and offered help to over 200 families in its six-year run, and members continue to offer—and ask for—support in their second mission to raise money for cure research. As stated in the proclamation, the week of March 4th-9th will be celebrated as Aplastic Anemia Awareness Week; all are asked to show support by wearing red during the week. To learn more about the JWF and Aplastic Anemia Awareness Week, please visit www.juliaswings.org and www.operationwearred.org.

Patrick Dwyer of Boy Scout Troop 48 presented his Eagle Scout project to the Board: to increase the number of residences in town with visible identifying house numbers in compliance with the Sherman House Numbering ordinance. The ordinance, under Section 1-3 reads “Identification shall consist of a numbered marking location within ten (10) feet of the closest road or access way…or from which the property is accessed by a common driveway. The numbered marking shall be mounted on a post or other stationary object of the owner’s choice at a height between thirty (30) and forty-eight (48) inches maximum.” The project will help the Sherman Volunteer Fire Department, EMTs, and State Troopers properly respond to calls. Dwyer explained that he will be taking orders for the numbers, will deliver them, and even secure the numbers for any resident who requires assistance. The goal is to complete the project by summer 2019. A table is anticipated to be set up at the Budget Referendum on May 4th in Charter Hall; please contact Patrick Dwyer at shermanhousenumbers@gmail.com.

Two expenditures were submitted by the SVFD for upgrades to Engine 3 and for a photo ID printer and software. Engine 3, the department’s 1995 Pumper, is in need of pump repairs, a new pressure relief valve, and upgrades to the lighting and backup camera. The expenditure is not to exceed $20,000 from the Capital Non-Recurring Fund, and costs will be split with $16,000 from the Town and $4,000 from the department. Captain Chris Fuchs spoke on the matter, saying, “We’re hoping to keep it another 10 years.” The second expenditure, for the printer and software, is not to exceed $2,000 from the Capital Non-Recurring Fund. As Capt. Fuchs explained, all first responders are required by law to present appropriate photo identification when arriving on a call, but as the State cut funding for the equipment, the responsibilities now fall to the municipalities. Town Treasurer Eric Holub inquired if the school’s ID printer would suffice, but Fuchs responded that the software was not compatible, and the IDs would not meet state requirements. Both expenditures will be brought to Town Meeting.

It was also reported that the department has not only responded to 65 calls but has 14 members now certified for cold water rescue and 14-15 members taking emergency medical responder courses. Plans for the 2019 summer ball are already underway, and any suggestions for the event are welcome.

The well-water contamination has been a long-standing issue in town, and Dr. Gary Robbins, who led the team in its research, was present for the meeting to discuss his findings. The first well discussed is at the firehouse. The well is about 400 feet below the surface and is contaminated with salt and nitrate; leaks in the casing were also discovered. Dr. Robbins explained that the surrounding soil may be contaminated, and recommends keeping snow away from the well and, if the well is replaced, put the casing further down. The second and third wells are located at the school. The one by the corner parking lot has water coming in from the rocks at 300 feet and the sodium calcium chloride is below drinking level. It is recommended that the school relies more on this well since the other, by the park, has poor rock conditions, high salt levels, and its secondary casing reaches the ground. Robbins also suggested flushing out the well in the warmer months to clear out the salt from the snow season. When the team tried to remove the pump at Town Hall the line broke, so a new pump was installed. The casing is leaking, and the well is contaminated by nitrate and pharmaceuticals. If the well is replaced, Dr. Robbins suggested setting the casing at 75 feet. The Senior Center well has high levels of sodium chloride and calcium chloride and has further been contaminated by septic. The well should be flushed out and the levels tested every hour. The depth of the well can be increased, and a tracer dye to find where the septic is leaking from. Recommendations are for the well to be either sealed or replaced.

John Motsinger, at Happy Acres Farm, reported that a bull was sold on February 26th, but the first calf was born on February 28th, keeping the herd count at 51. Lowe met with Mason Lord regarding repairs and painting in the barn, and Lord is “getting the scope of the project.” His report is anticipated within the next 3-4 weeks. More details to follow.

The next Sherman Board of Selectmen meeting is scheduled for Thurs., March 28 at 7pm.