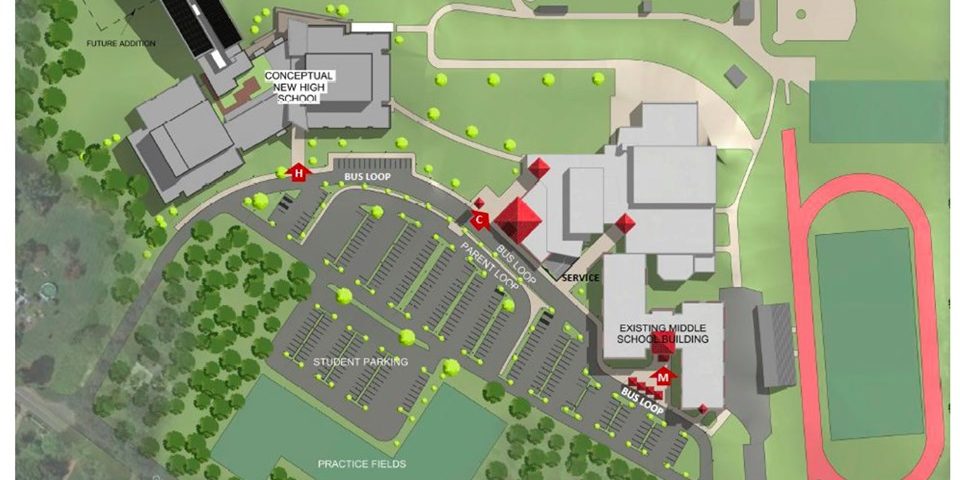 New Fairfield’s Permanent Building Committee (PBC) dealt with the news that the new high school project is running 14 to 15%, or approximately $10M, over budget nearing the end of its schematic design (SD) phase at their July 21 special meeting. In creating the cost lists that accompany the end of the SD phase, O&G and JCJ Architecture, are calculating square footage costs at a soaring $414 and $420 per square foot, far above the standard state maximum of $365 per square foot. PBC Chair Mr. George Martignetti expressed frustration, saying of the initial plans that there is “Nothing extravagant in the design that would be causing this type of bust,” he went on to say that “this is high to me, this seems really high” and he is “really uncomfortable with the way we are trending.”

“We’re tracking over budget,” said Mr. Charles Warrington of Collier’s International, the company who serves as the district’s advocate throughout the entire process, going on to say, “It’s not where we want to be.” He went on later to say of the extremely high square footage cost estimates, “We are a little bit miffed by it, to be honest” and questioned why the bids would be so high for line items when the overall trend in construction is a reduction of cost at bid and projects are coming in under budget. He explained that he plans to investigate recent bid amounts at the state level on similar projects to help the team try to understand why the high school is tracking a delta of “roughly about $40 per square foot higher than recent comparable projects.” However, he noted that there aren’t many projects moving forward this year to compare them to, possibly due to the pandemic. “These two projects [the HS and CELA] represent a third of the major projects that are coming up to bid, there’s not a whole lot out there,” Warrington said. He shook his head and went on to say, “I’ve never, again I don’t know what’s going on with these, but typically we are at like 8 or 10% prior to VE, and if we get down to 4 to 5% we’re pretty comfortable moving forward…8 to 10% at a minimum we have to get to in order to proceed.”

Possible approval to move on to the design development (DD) phase was on the agenda, but the Value Engineering (VE) list was not ready to be acted upon. School administrators, Collier’s, O&G, and JCJ Architecture were planning to meet often in the days following the meeting to better hone in on the final list, which is slated to be complete by the month’s end.

Of the VE list items, JCJ Architecture’s Mr. Peter Bachmann said, “Compromises have had to be made,” because of budget challenges, though he stressed that “no piece of education spec or the basic educational programming has been touched, but rather some of those things that were, let’s say, discretionary have had to be reduced in size or are not going to carry forward in the project.” Reducing the square footage from 157K square feet to approximately 143K square feet helped to bring the costs down and “may have been a reconciliation,” Warrington said, after the square footage grew during the ed spec planning. Some particular items include potentially controversial ones, such as eliminating the intent to perform repairs on the existing locker rooms at the Middle School. The PBC’s Mr. Mike Del Monaco said, “I think we could look to descope, but that needs to be addressed, that’s a health hazard…” While committee member Mr. Paul Boniello said, “We’ve made some commitments to the community and we have to be careful of that as well.” Other items include significantly reducing the size of the new auditorium and several features associated with the space including Blackbox Theater, dressing rooms, ensemble rooms, reduction in stage lighting, rigging, curtains, and a 2-stop elevator. Eliminations of a planned greenhouse, half of the team room spaces, an event center, and more will now be removed from the plans. In addition to a large amount of material and mechanical systems swaps, there are also a number of reductions or eliminations in planned programming spaces such as a world language huddle area, breakout spaces, and the overall size of common zones.

Though some of the high costs are due to site work, most are in the building, which complicates the matter. “We are trying to be cognizant that you want this to be a building that everyone’s proud of,” said O&G’s David Cravanzola, who explained that all of the small costs add up rapidly to amount to the current high square footage cost. There are “a lot of things that play into that” he said, noting that some VE recommended items were rejected by the school, which makes reconciliation harder. Some of those items that were suggested for elimination but rejected by school officials include keeping the western roadway in its existing location, further reducing the auditorium, only building a warming kitchen at the high school, and more. Martignetti said he’s “seeing the same trends” as Cravanzola, but didn’t give him an inch, saying “we need to start seeing the needle move in the opposite direction.” Cravanzola pointed out that the whole process is a team effort. Martignetti acknowledged that everyone is working very hard and there is a dream team of consultants in place, which is a source of his frustration at this point. He said that his focus “is with David…getting creative with some constructability ideas is going to be key.”

PBC members, many professionals in the construction industry, tried to get to the root cause of the high bids and had a large number of ideas that could come into play, from reconsideration of cafeteria ceiling height and the chosen structural shell materials to the outdoor plaza area size and rethinking eliminated parking spaces, storefront windows, dust collection systems in the woodshop, gas piping to the science rooms, and more. Boniello pointed out that opting for prefabricated wall panels and reconsidering roof materials are “Things that we do all the time,” saying the they need to hit some of this “before we start taking away from the aesthetics…get it in the beginning, where you really don’t see it, behind the wall.” Del Monaco encouraged the team to think far outside the box if needed, saying, for example, “we have a perfectly good cafeteria sitting there in the other building. If we build a walkway and delete the cafeteria, that’s probably $4M.” Bachmann thanked the PBC members for their input, said that many of their suggestions are being considered, and invited them to join the meetings that are being had to refine the VE lists.

In addition to discussing the VE list, the PBC also listened to a presentation on HVAC system options for the high school. Mr. Mike Bouchard of Consulting Engineering Services explained the benefits of the Variable Refrigerant system, which include the elimination of mixed air among spaces, a consideration that helped tip the group toward choosing this system for CELA. The cons include workers being less familiar with this newer type of system and the additional maintenance and consumable storage of many filters. Though full cost estimates were not ready at this meeting, Bouchard noted that the costs would be comparable to the spread between the two estimates for the CELA project.

Bachmann gave a brief update on the CELA DD phase, saying that it is moving along. Architects were to be onsite, in the days following this meeting, to confirm existing conditions and assure that there is “parity in fit and finish.”

The next regular PBC meeting is scheduled for Tuesday, August 11, 7:30 pm.