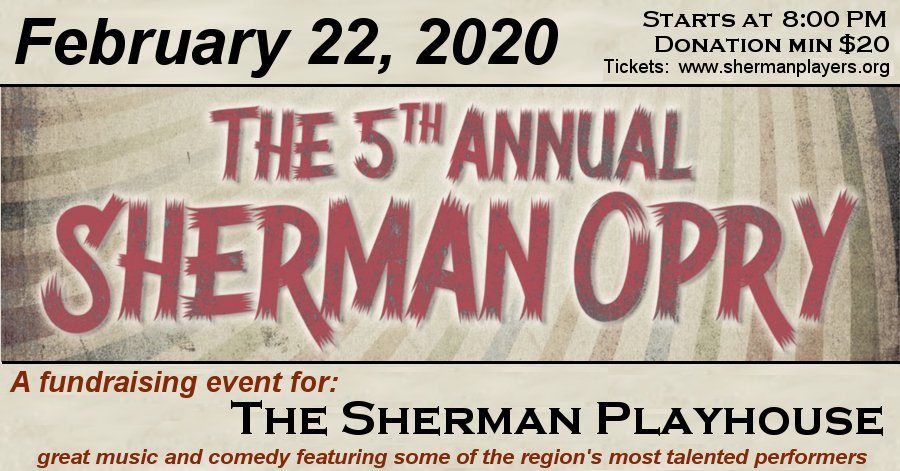 On February 22nd, beginning at 8pm, the Sherman Playhouse will be host to The Fifth Annual – Sherman Opry. It’s a lively, entertaining concert performed by local musicians, singer songwriters and comedy performers, many of whom call Sherman their home.

As a fundraiser for our town’s historic Sherman Playhouse, the Opry donates all of the proceeds from the concert to the playhouse and the good work of the Sherman Players in their efforts to bring great live theater to our town.

According to the Playhouse’s website, www.shermanplayers.org, the Playhouse has seen many improvements over the years. In 1960-61, a large addition, designed by Ed Castro, gave the Playhouse a bigger stage, dressing rooms, bathrooms, new pews and a furnace. In the 1970s, a second addition provided storage space, a costume loft, fire coded exits and a ramp for the disabled. In the 1980s, the town helped with fire code requirements, sheet-rock, new stairway, emergency doors, restrooms, floor leveling and a new electrical system. The 1990s brought it up to date with central air-conditioning, new interior shutters, new stone steps at the entrance, a new lighting system and an ambitious recreation of the original church steeple. In 2010, major renovations were made to the green room and dressing rooms. In 2015, a Steap grant provided the means for a complete renovation of the bathrooms, an additional bathroom for the actors, and the office. Also tiling and carpeting were added throughout the downstairs.

Since 1926, the Sherman Playhouse has been a gem inspiring the creative energies of performing artists of all ages. The Sherman Players has given Sherman and the surrounding communities a full range of high-quality entertainment. Moving forward, with your participation and support, we aim to continue for years to come.

“This year’s concert will feature ten acts, collaborations of some of the area’s top local musicians, who will be performing the music of some of the great recording artists from the 60’s through the 80’s. The audience will be encouraged to sing along, and even get up and dance, to some of their favorite songs from that era of popular music,” said Al Burgasser, one of the organizers of the event. “This being our fifth year for the Sherman Opry, we feel that it is gaining the status of a tradition in town and promises to be a memorable event, dedicated to a great cause.”

Participating in this year’s event are more than 40 cast members, all volunteering their time and talent as performers, lighting and sound technicians, stagehands and theatrical support staff. Even two of our local dignitaries, Don Lowe, Sherman’s First Selectman and Robin Frome, president of the Sherman Players will be sharing the stage with this unique gathering of so many talented artists.